Zee tv popular show KundaliBhagya is all set for a major turning point in their show. Earlier its seen that, when Rishab asked how Mahesh fell down, Mahira told Preeta pushed Mahesh from upstairs. Sherlyn gets happy thinking destiny too helping them to trap Preeta. Preeta reached hospital with one neurosurgeon to treat Mahesh.Doctor told Mahesh’s condition is not stable, he is still in critical stage and it’s worsening more that’s why he went to coma again. 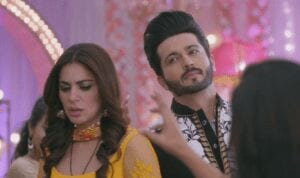 Preeta asked Mahesh to not break luthra’s hope and asked him to wake up for them. She promised him that she will find the culprit who tried to kill him. Mahira told luthra’s that Preeta pushed Mahesh to stop Karan’s marriage. Everyone believed her and scolded Preeta. Karan told he should not have trusted Preeta.

In the upcoming episodes it will be seen that Sherlyn cryingly asks what exactly Preeta wants? Before Preeta says anything Karan stops her. Sarla says if Preeta or Sristy again went to luthra house then they have to see her dead face only. Kareena says already arora’s did many wrong things with them, so from now no one from luthra’s should should keep any kind of relation with arora’s. She says Karan married Preeta for revenge. Karan nods to her.

What will be Karan’s next step? Will Preeta listen to Sarla?