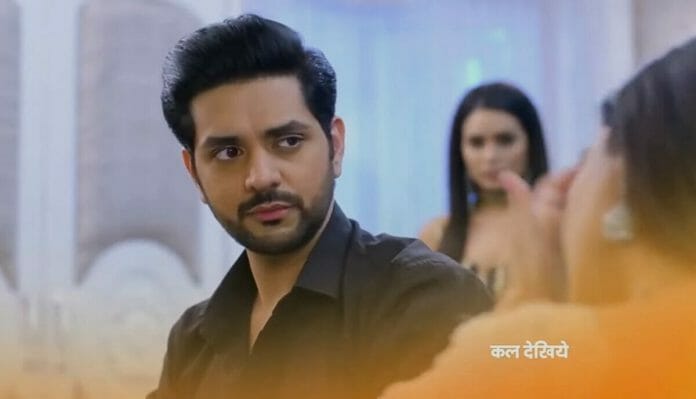 Shraddha Arya and Shakti Arora starrer Kundali Bhagya is one of the top Zee TV show. It has been around for a long time now and it was an audience favorite at all times. Now, Arjun won Luthras heart so it will be interesting to watch that what going to happen in the future episodes.

Earlier it’s seen that, Sherlyn threatened that she will shoot them if anyone moved then. She asked Luthras to give the jewels to her. Rakhi refused to give her jewels. Kavya came there. Sherlyn dragged her and tried to snatch Kavya’s necklace.

Kavya refused to give her necklace. Rishabh and Rakhi asked Sherlyn to not hurt Kavya. Arjun was about to attack Preeta assuming her as goon. She told him that she is going downstairs. He told her that many goons are there. She asked him to not underestimate her.

Kavya bite Sherlyn’s hand then she ran from there. Prithvi lifted Kavya up. Preeta saw everything. She went downstairs. She pleaded Prithvi to give Kavya to her. He gave Kavya to her. Sherlyn glared him. He realised what he did and he dragged Kavya and hold knife on her neck. Arjun attacked Prithvi and beat him up.

Luthras beat goons up. They went upstairs. Anjali told Arjun that he is not able to control his emotions because of Preeta. He told her that he fought with goons for his family. Rakhi told Rishabh to not go downstairs. She said she can’t lose him and cried.

Arjun told Rakhi that he won’t let anything happen to Rishabh like he promised to her. He told Kavya to not get scared. Sherlyn told Prithvi that they have to escape because Luthras called Police. But Prithvi refused to leave. Vishnu told Raja that they should announce that Arjun hired them to kill Rishabh.

In the upcoming episode, Rishabh will tell Preeta that Arjun won everyone’s heart even though he is weird. Preeta tells him that their family is good and Arjun did nothing special, when treating his injury. Later, Preeta will tell Arjun that pain kills pain. Arjun will tell her that she have master degree in giving pain to others.

What happened to Prithvi and Sherlyn? What Preeta will say to Arjun?