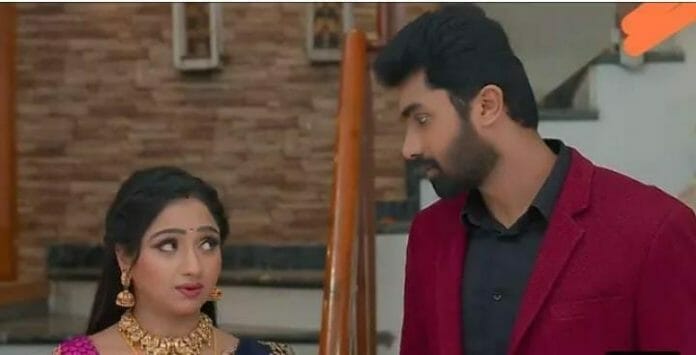 Maari is newly launched show of ” Zee Tamil”. Maari has the innate ability to see the future and foresee impending dangers. Now series focuses on Vickram to grow suspicious

In the previous episode we saw; Hasini said to Thara that Surya wished to take Maari out. Surya said to her, he won’t take her out without Thara’s permission. Thara got happy hearing the way Hasini praised her. She decided to send Maari out with Surya. Surya was getting ready to leave.

Surya revealed to Jagdish that he was taking her out for Thara’s sake. She was shocked to hear it. Hasini escaped from there. Sreeja stole Surya’s lucky earrings and throw it out. It fell inside the car.

In the upcoming episode viewers will see; Surya will take Maari out. He will stop the car to buy a water bottle. Maari will hear someone crying sound. She will inquire Sneha what happened to her?

She will tell her that someone trying to kill Surya using jasmin flower the way she did to her husband. Maari will get shock to hear it. She will get shock to see that ghost disappeared after Surya come. Later, a stranger tried to attack Vickraman