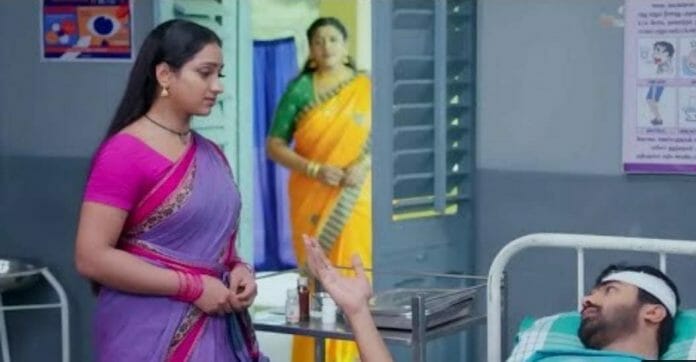 Maari is newly launched show of ” Zee Tamil”. Maari has the innate ability to see thr future and foresee impending dangers. Now serial focusing on Maari to save Surya!

In the previous episode we saw; Maari showed the ring to Devi and questioned her Isn’t it belongs to her? Devi remembered how did she promised her son to meet him asap and drank the poison mixed water given by Shankaran. She walked to temple and prayed god to save her son from enemies and died there.

Maari returned her ring to her but Devi asked her to accept it as her gift. Devi demanded her to place the vermilion on Surya’s forehead to save him. Maari rushed to hospital to meet Surya. She learnt from doctor that Surya got well he was taking rest. Devi came near Surya and felt emotional seeing him in thar state thete. Meanwhile Maari went inside Devi disappeared from there.

In the upcoming episode viewers will see; Maari will apply vermilion on Surya’s forehead. He will get conscious and enquire her who is she? She will introduce herself to him and reveal she admitted him in hospital. He will hand shake with her and thank Maari. She will leave from there.

Jagdish will visit hospital and learn from Hospital that one girl saved Surya’s life. He will get emotional seeing Surya in such state.