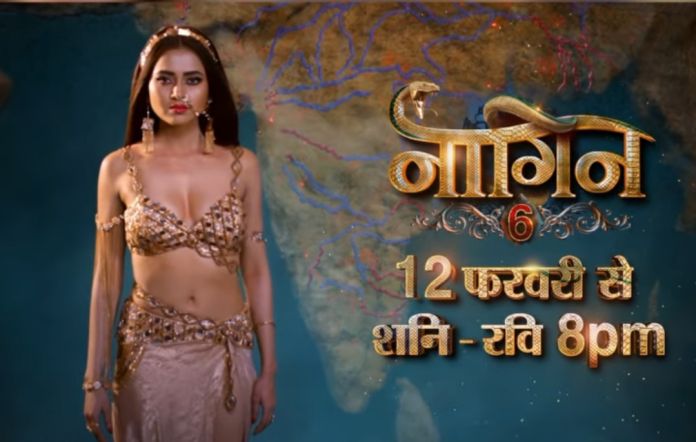 The episode starts with Mehek noticing Nevla is taking Chanda. She fights with him to stop his attempt but he hurts her. Rishabh tells Pratha that he will leave her if she is proven to be wrong in Rehan’s matter. He leaves. Seema asks Pratha to get ready to leave the house and Chanda is with Nevla. Pratha tells she won’t let anything wrong happens with Rishabh and his Mom. Pratha goes in front of Nevla in her snake form. She fights with him and locks him in the circle of Trishul. He couldn’t move out from that circle. Pratha kills him by attacking his eyes with the Trishul. Pratha sees Chanda and thinks she won’t let anything wrong happens to her.

Seema gives the mat to Pratha and asks her to get ready to leave the house. Pratha says you need the mat as I killed your Nevla. Seema gets angry and tries to attack her with a knife but Pratha stops her and asks why she is feeling bad about Nevla’s death? What is your relationship with him? Seema tells she will teach them a lesson.

Seema reaches the temple. She can’t enter the temple because of Naagrekha. She calls for Raynaksh and Bunnu. Bunnu comes there. Seema tells him that Pratha told her that she killed Raynaksh. Bunnu searches him with his power. He finds his dead body. Seema cries seeing him. She asks Bunni to do something. He tells her he is doing and sends his team of mongooses. Seema tells Raynaksh that nothing will happen to him. Mongooses bring the snakes. Bunnu collects poison from the snake and pours it into Raynaksh eyes. Raynaksh gets life.

Chanda takes Bunnu’s name in her sleep state. Pratha asks who’s this Bunnu. Mehek says don’t know. Pratha says Seema may know him Nd this Bunni might know the story from the start, where is he. Raynaksh gains consciousness and calls her Mom. Seema hugs him and says I kept you away from everyone as I want you to get Amrit Kalash to make Changistan win over Hindustan but you got defeated in Pratha’s hand and she won’t leave you if she finds you’re my son. Raynaksh tells her he will get the Amrit Kalash before the dark night ends. Seema stops him telling him she will handle Pratha and she swears on his blood that she will throw out Pratha from home.

Bunnu tells Raynaksh that motive is important to his Mom and he couldn’t achieve it that’s why she is angry. Raynaksh leaves from there. Samaira wakes up and tells Pratha that she will leave for her parent’s place. Pratha asks her to fight for herself and others. She takes Pratha with her. Vijay beats Rehan and asks him to write the statement. Rehan talks about Mehek to instigate Vijay. Vijay falls into his trap and beats him. Rishabh tells him that he can’t treat his brother in this way as he didn’t prove to be wrong. Vijay goes out. Rehan tells Rishabh that Vijay is the boyfriend of Mehek and that’s why he is treating me in this way I feel Pratha wants to have a complete property that’s why she doing this in this way. Rishabh says Pratha is not in that way. He calls the commissioner and complains to him about Vijay.

Rishabh returns home and asks Mehek to leave home telling them she bribed the Vijay. Pratha says she won’t leave anywhere and why can’t you see Samaira state and do you react in the same way if it happens with your sister. Rishabh says Rehan is with me in the bus and these are baseless accusations. Seema says Rehan is good. Anya and his sister say they are with Pratha Bhabhi as they saw how many affairs Rehan had and how he misbehaved with Samaira. Reem scolds them for supporting Pratha and Mehek. The nurse tells them Radha is sinking. Rishabh tells Pratha that he won’t leave her if something happens to his aunt.

The next day, Rehan returns home. Rishabh asks him to meet his Mom. He meets his mom. Samaira wants to leave the house but Pratha asks her to wait for some time. Later Rehan tells His brother and Reem that he wants to make Pratha leave the house. He attends his friend’s call and agrees to attend the party. Mehek asks Pratha what’s she going to do. Pratha tells she will prove him wrong. Later Pratha calls Mehek and asks her to follow Rehan. Pratha hits the table seeing Rishabh. He bandages her wound and helps her to walk. Rehan and co enjoy in the bar. Rishabh asks Pratha why she is supporting Samaira while going against their family. Pratha says she is supporting the truth. Brother of Rehan tells him that he arranged the trap. Reem loses the challenge. She choose dare. Everyone asks her for sexy dance. Ritesh stops her. Rehan eyes at sexy girl. Pratha thinks to expose him.

Precap – Rishabh throws out Pratha. Seema tells her that she will kill Rishabh. Pratha traces Amrit Kalash is in the Paatal Lok.