The episode starts with Saroj telling lawyer we are still one for outsiders. Iravati tells Ravikant that entire family is with you. Kahani comes to police station and tells she want to file a complaint. Kahani tells the police her name is Cham Cham Rani and Ravikant Verma is her father and he cheated on her mother. Police denies writing complaint but Kahani tells she will show the public how police is treating common people. Lawyer tells no one should tell the truth in front of police. Raunak tells him not to worry all of us are professional liars here.

Rupa and Gunjan tell Ravikant he will be responsible for their destruction. Police tells Ravikant has to come to police station. Ravikant tells Iravati he will fulfil Kahani’s wish now but when he will return Iravati will pay for her mistakes. Iravati tells so you remember everything but you should remember you met Kahani and her mother behind her back. Iravati tells Ravikant he can never prove she pushed his car. Ravikant tells Iravati he won’t let anything wrong happen with Kahani and after returning he will make Iravati pay for her crime.

Ravikant blesses Kahani and recalls playing with her in childhood. Ravikant leaves with police. Yug tells Kahani to leave the house. Kahani tells the divorce has not yet happened and even after the divorce Yug cannot send her out because half his property and house will be hers. Lawyer tells Iravati to come to office with her for some important talks. Kahani recalls signing the divorce papers and cries.

Iravati tells lawyer Ravikant that she is his second wife and Ravikant had two daughters from his first wife. Iravati tells thay Kahani is talking about her mother but not about her sister so maybe she does not know about it. Lawyer tells the best solution is Kahani withdrawing the case or else she will get half the property in court. Kahani tells she wants 5 lacs ruppees from her husband because she is going to hire a lawyer in two hours.

Saroj tells Yug she wants to talk with him alone. Rupa tells Raunak you brought Kahani in our life and so we are facing all this problems. Saroj tells Yug to give money to Kahani and maybe she will think you support her,she tells Yug to stay firm on his decison of marrying Gunjan so that Kahani withdraws the case. Gunjan tells Yug is giving money to Kahani. Iravati tells Gunjan that Yug will marry you on Monday and all this is a part of Saroj’s plan.

Yug gives money to Kahani and she tells she is not greedy and she needs this money to punish Ravikant Verma. Kahani tells Yug that she cried a lot for her father and so he should also cry a little. The episode ends with Yug telling Kahani to withdraw the case or else she will be the first wife who will get her husband married to someone else. 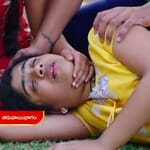