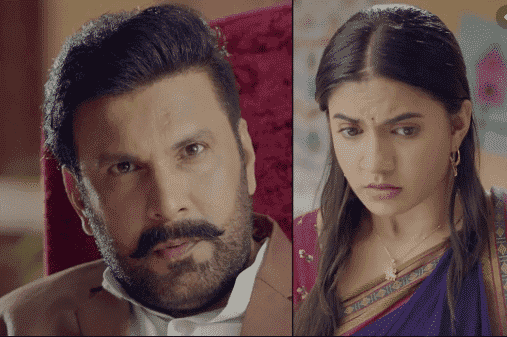 Next in colors show Vidya will see, Sumati will decide to go against Nanku. So far in the show it is seen Nanku kidnaps Munni to force Vidya to spend time with him. Nanku already has an evil eye on Vidya and he gets the chance to force Vidya to spend a night with him when Vidya goes to the city for Munni’s admission.  Nanku calls Vidya and says he will leave Munni once she will come to him. Vidya agrees to meet Nanku alone for Munni’s sake. Nanku gets happy seeing Vidya and tries to get closer to her. He was about to touch Vidya and at the same time Vivek enters the room to save her from Nanku. Nanku threatens Vivek and says he will kill him and Vidya as well but gets shocked seeing his whole family standing at the door and seeing his drama.

Sumati decides to give the statement against Nanku so that court can punish him.

Further, Nanku to win emotionally blackmails Kalindi so that he can come out from the jail. Kalindi decides to support Nanku because she loves him a lot. Kalindi goes to meet Nanku and Nanku manipulates her.

Now in the coming days will see, Kalindi will ask Sumati not to give the statement in the court against Nanku but Sumati will refuse.

Other side, Vidya will be offered to conduct the rituals for Diwali pooja after priest will fall ill. Later, kalindi will beg in front of Sumati to not testify against Nanku in court.  And will become angry after Sumati will refuse.

It will be interesting to watch what more twists and turns will come in the show.

Stay tuned with us for more news, spoilers, written updates. and latest updates.