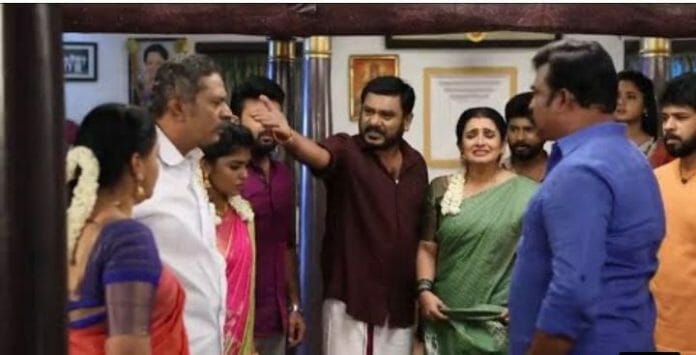 Pandian Stores is a famous Vijay Tv show. This show entertains the viewers every day with a lot of twists and turns in its storyline. Moorthy and Dhanam sacrifice a lot to raise their brothers Kathir, Jeeva, and Kannan. Earlier its seen that Moneylender humiliated Moorthy. Kasthuri overheard Janardhan when he belittled Kathir. Now the viewers will see that Kathir will oust Pandian home.

In today’s episode, Chaos at Moorthy’s place. Janardhan insults Kathir. Parvathy lashes out at Janardhan. Kamakshi confronts Janardhan when he insults Dhanam. Kathir and Mulla get emotional. Kathir feels guilt-ridden and apologizes to the family. Parvathy and Janardhan accuse Dhanam. Jeeva yells at Janardhan. Dhanam tries to stop Kamakshi. Jaga gets into argument with Janardhan. Dhanam asks Kannan to pawn her jewel to pay off Meena’s money. Kamakshi gets the jewels. Kathir and Mulla apologize to the family. An uncontrollable rift between the family. Moorthy loses his patience as they cross the limit. A shock for the family when Kathir takes a firm decision.

In the upcoming episode, Kathir and Mulla will leave the home. Dhanam will try to stop Kathir and Mulla. How this chaos is going to end? Will Moorthy faces a financial crisis? Will Mulla’s wish come true? To know what is going to happen next in your favorite show Pandian stores, keep watching the serials stay tuned to this space for new daily updates.