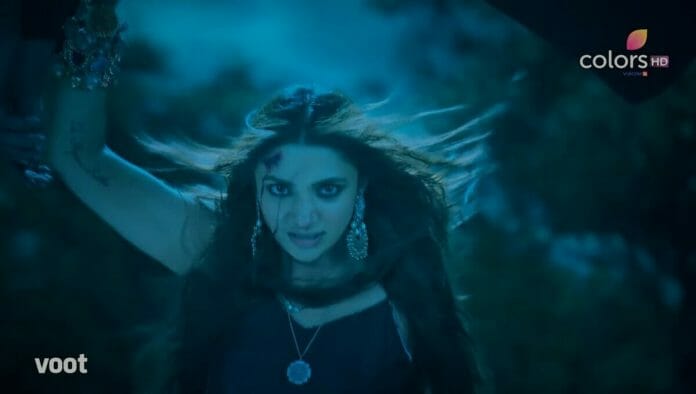 Previously, it was seen that Pavitra shocked Maha Pishach by revealing that she already knew that Veer wasn’t Nashak, but Maha Pishach. Maha Pishach tried to kill Pavitra in order to become more powerful. A raged Pavitra fought with him. Meanwhile, Rocky met the real Nashak and got a crossbow  to fight with Maha Pishach.

In the upcoming episode, it will be seen that Nashak and Rocky will confront Maha Pishach, who will try to kill Pavitra. Pavitra will be shocked to know that her aunt is Nashak. Maha Pishach will think himself invincible and will say to Nashak that the crossbow that she gave to Rocky couldn’t kill him. A new weapon will appear in Nashak’s hand. However, Maha Pishach will claim that even that weapon can’t kill him.

He will wait to kill her once her power reduces after being drenched in the green rainfall. Pavitra will remember her grandfather’s words before dying and then Rocky giving her the locket. She will hold the locket in her hand. She will get strength to get up. She will stab Maha Pishach with the weapon and kill him.

However, Pavitra will sense that her family is still threatened and will wonder who is going to attack her hiding. Rani will be happy sensing Maha Pishach’s defeat and will shout, asking someone to release her.

Will Rani get released and will come back to take revenge on the Rajputs?