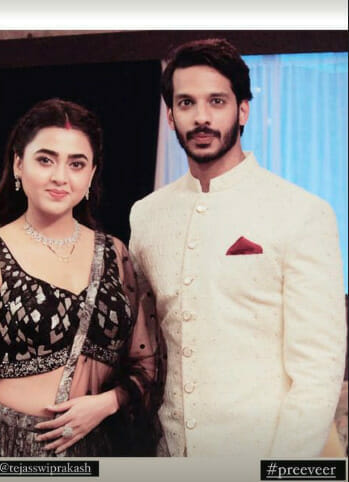 Naagin 6 will see its finale soon. Show took multiple leap and story is revolving now around Prathana and Raghu. The duo is creating magic on the screen according to the fans. In the last week episode, Prathana fallen in Raghuveer’s arm. Both get romantic.

The sequence between Tejasswi Prakash and Shrey Mittal’s chemistry burned the screen. Fans falling for this Naagin couple. Read tweets:

Actor Shrey Mittal who is playing Raghuveer in the supernatural show shared an off-screen bts. No sooner he dropped his picture with Tejasswi Prakash; fans showered their love for the couple.

Actress Tejasswi already nailed Pratha in the show. She was recently praised for effortlessly performing Prathana.

you nailed today episode,4 costume changes for your significant character,your hardwork are expressed by your versatile performance Those emotions,those angst

Tejasswi and Shrey earning separate fan base. They will soon become one of the top Naagin Jodi like the previous Jodi’s.

Talking more about Naagin, the sixth edition will see its finale soon. According to the report, ex-Naagin’s will mark their entry in the show to spice up the story. Surbhi Chandna, Surbhi Jyoti and Anita Hassanandini’s name is out.

Actress Ada Khan already entertaining the audience with her stint in the show. Fans are excited for the finale of the show.

According to the new promo of the show Mahek will harm Prathana to take the Naagmani. Will Naagin’s be able to save the Naagmani? Keep watching the show for more entertainment.