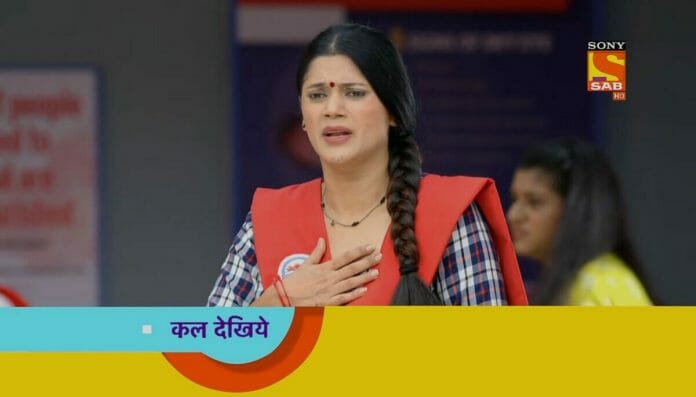 Sab TV channel launched a brand new show titled Pushpa Impossible starring Karuna Pandey alongside Garima Parihar and Darshan Gurjar. Earlier its seen that Golu got lost and Pushpa found him. Now it will be seen that Pushpa will face hindrance during exam.

Previously we have seen that, Pushpa warned Golu to not go missing as his father was very much tensed. Golu apologized everyone. Kaku reminded Pushpa that she already wasted enough time and asked her to study. Deepti dreamy of dancing with Ashwin in rain. Pushpa visited Manish’s House for tuition even drenched in rain.

They discussed about the limitations in the education system. Pushpa went home only to get confronted by Bapodhara for partying in terrace. Pushpa agreed to pay for it when Bapodhara fell and got hurt. His hearing aid hurts his ears and he recalled Dileep hurting him which resulted in his deafness.

He exhibited his anger on Dileep and his family and Pushpa accepted it understanding his pain. She slapped Chirag when he told that Bapodhara deserved it. Pushpa suffered fever. Doctor treated Bapodhara and gave him new hearing aid.

In the future episodes we will witness, Pushpa will be scared about her exam. She will start giving her exams when on by one many students will start falling sick. Pushpa will rush to help then when teacher will ask her to concentrate on her exams while they will take care of the children.

Will Pushpa pass her exams? What happened to the students?