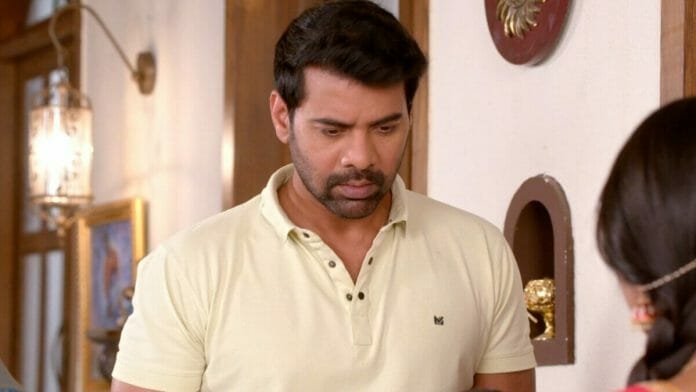 Episode begins with Mohan apologizes to Radha which shocks everyone. Damini thinks that how can Mohan apologize to Radha. Mohan tells Radha that he did wrong by not supporting her. Radha tells him that he need not to apologize to her ( Title song plays in the background ). He reminds her that how she told him about the importance of relationship. He asks her to think about Gungun before leaving the house. He adds that he is trying to stop her wholeheartedly. She asks him that if he remember all this. He tells her that they made sin by accusing her.

Kadambari requests Radha to not leave the house. Kaveri thinks that Kadambari become mad. Radha asks Kadambari to not do this. Vishwanath tells Radha that if she left like this then he can’t face Rameshwar again. Radha says that she won’t leave. Ajeet tells her that if she changes her decision then they will stop her again. Gungun tells Mohan that he did not apologize properly. Mohan tells her that she would have enjoyed it. He reminds Radha about her English classes. He tells her that he will beat her up if she does not study well then. Radha asks him that if he will beat her up.

Gungun says that, that’s domestic violence. Mohan tells her that that’s not domestic violence because Radha is not his wife. Everyone gets silent hearing him. Gungun says that she is glad that Radha is not Mohan’s wife. She asks Radha to thank God for saving her from Mohan. She tells her to inform her if Mohan beat her up then. And they can beat Mohan up. Radha hugs her.

Mohan tells Kadambari that Gungun did not call him as killer after hearing wife from him. Kadambari tells him that Gungun changing. He tells her that Radha is the reason for Gungun’s this change. He adds that he has to do one more thing for Radha.

Kaveri tells Damini that it looks like this family belongs to Radha. Tulsi’s spirit says that she won’t let Damini become a part of this family. Damini goes outside. Kaveri follows her. Damini says that Mohan become mad. Kaveri tells her that they will find a way to get rid of Radha. Mohan comes there and asks them that what’s happening. Kaveri makes an excuse and he leaves from there.

Later, Mohan stops Damini from sitting beside him. He calls Radha and makes her sit beside him. He says that Radha is part of this family so she should eat with them. He serves Radha which surprises the latter ( Title song plays in the background ). Mohan taunts Damini indirectly. Damini argues with Mohan and leaves from there. Radha tries to follow Damini but Mohan stops the former. Kadambari tells Mohan that he should not behave like this with Damini. He tells her that she will understand his behaviour soon. Tulsi’s spirit says that Mohan changing.

Mohan goes to Damini and tells her that she may accuse him too. Damini asks him to stop this. She says that everyone thought Radha is theif not only her. He tells her that everyone accused him even though he is innocent and same happened with Radha. She asks him that what she should do so he does not stay angry with her. He asks her that if she can apologize to Radha.