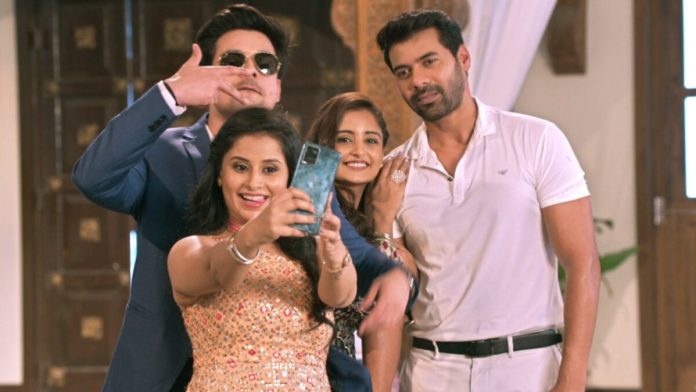 Episode begins with Gungun asks Mohan that what he will do if she opposes the marriage then. Mohan recalls that how Damini’s mother criticized Kadambari. He tells her that he will marry Damini at any cost. He adds that he can’t break his promise. Tulsi’s spirit says that Gungun understood that what kind of person Damini is but Mohan failed to see the real face of Damini. Gungun asks Mohan that why he came to her if he already decided to marry Damini then. She asks him to leave from there. He asks her to listen him once. She says that she knows that elders are cheaters and ousts Mohan from her room. She says that everything happening because of Radha so she wants her to leave the house. Tulsi’s spirit says that only Radha understands Gungun.

On the other hand, Radha decides to prepare laddus before leaving. Damini’s mother asks Radha that if the latter has not left yet. Damini tells Radha that driver waiting for her. Radha tells her that she is preparing laddus for her and Mohan. She adds that Gungun is also angry at her so she want to give laddu to Gungun too. Damini and her mother leaves the kitchen. Radha takes the box to keep laddus. Mohan enters the kitchen and hurts his leg because of Radha’s mistake. She apologizes to him and asks him that if he is fine.

She asks him that what is he searching in the kitchen. He tells her that he was searching mushrooms to throw them in the dustbin. She tells him that she gave the mushrooms to servant yesterday itself. She keeps the laddus in the box. He asks her that why she didn’t come to study yesterday and what is she doing in the kitchen. She tells him that she was preparing laddus. He scolds her for not concentrating on studies. He tells her that Gungun also used to make excuses like the latter. He takes her to her room and asks her about books.

Damini tells Mohan that Radha leaving today because she is missing her family. He tells her that they can call Radha’s family here. Radha tells Mohan that she can stay in maid’s room. He tells her that she is their guest and she did so much for them. Tulsi’s spirit says that finally Mohan did the right thing. Mohan tells Radha that they are getting late for English class. She tells him that Damini has her books. Damini says that she took the books from Radha because they are Gungun’s books that’s why. Mohan asks her to return the books to Radha. Damini returns the books to Radha and says that Radha become a part of this family. Mohan takes Radha to guest room.