The pandit says hat Vyas ji does not deserve to be mahant any more and takes his rudraksh locket. Aalekh pretends to speak for Vyas ji while Mama ji also pleads to not do this or this will break Vyas ji. Chahat is operating on the pregnant woman but that moment light goes. Neel comes and tries to make arrangements for electricity using batteries.

Chahat tries to relax the patient while Neel succeeds in bringing electricity. The pandits wipe Vyas ji’s tika which breaks him down , while Chahat successfully operates on the lady and saves her. She informs everyone and the husband thanks Chahat for her help.

Chahat reaches home and receives message from Neel that his job is final so she decides to give sweets to everyone in this happiness. She goes to Vyas ji with halwa and offers him but he throws it away. He mocks her for celebrating his destruction and tells her that because of her his position of mahant has been taken away.

Neel also hears it and Vyas ji continues to taunt Chahat. Neel defends Chahat saying that she spends her time treating patients in hospital instead of doing all this. Vyas ji says that he is responsible for this day so Neel says that he is upset about this but Chahat is not to be blamed.

Vyas ji is surprised that Neel is taking Chahat’s side even after all this. He says that he is ashamed of having him as a son so Neel also replies that he is ashamed of being his son, a member of a family that values religion over relationships. Vyas ji goes inside while Chahat feels guilty for creating rift between Neel and Vyas ji unknowingly.

Chahat stands on one feet and prays for everything to be fine while Aalekh celebrates his success. Next morning, a girl is seen putting a memory card in a doll. Chahat struggles to stand on one feet when Neel comes and asks her to stop this as nothing is going to change. He tells that he went to talk to Vyas ji but he doesn’t care and her efforts are wasted.

He requests her to stop this and eat but she denies, Alka sees them and thinks of something to make things right. Mama ji tries to convince Vyas ji to eat but he denies that, they hear Kripa crying so Alka comes with milk and keeps it in front of Kripa.

Alka says that Kripa will only get milk when Vyas ji eats. She and Mama ji convince Vyas ji to eat something and after that Vyas ji gives milk to Kripa. After that Alka announces that Vyas ji has eaten food so Chahat leaves her posture but faints. He takes her at home and forces her to eat and complains about her being stubborn. She prepares to go to hospital but Neel tries to stop her so she says that she is fine now and has to go for the patients.

Neel brings her close and says that she inspires him everyday to fight these people and convince them to accept their love. A parcel comes which is received by Alka but she is unable to read the name as it is in English. Naveli watches and gets irritated as she wants her to give it to Neel. She gives her the parcel and Naveli hopes that she will open the parcel seeing Saraswati’s name on it. The episode ends. 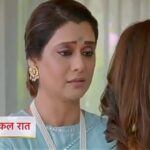 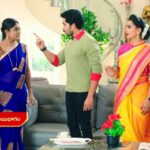 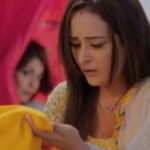 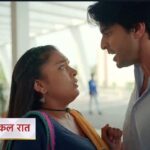 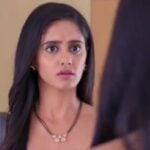