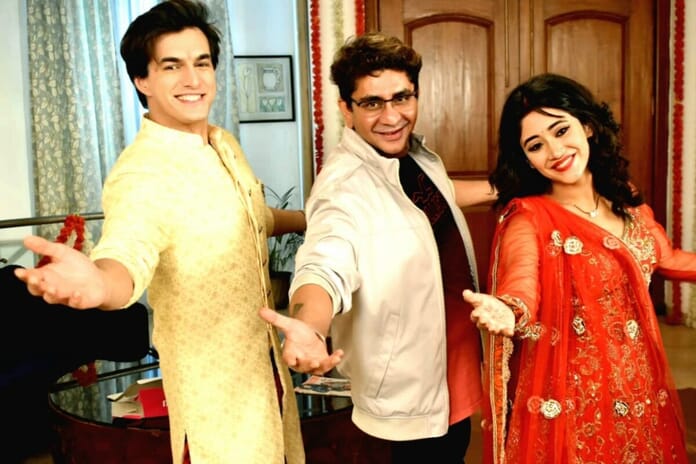 Almost five years back, Shivangi Joshi and Mohsin Khan came onboard as Naira and Kartik in Rajan Shahi’s “Yeh Rishta Kya Kehlata Hai”. Their chemistry made the audience fall in love with them, and they even nicknamed them as Kaira. In fact, in the beginning of the year when Naira died, and Shivangi returned as Sirat, their fans rooted for Kasir. And now that it’s time for them to bid adieu to the show producer Rajan Shahi shared an emotional post on his Instagram account thanking them for being a part of this amazing journey.

Mohsin and Shivangi who symbolise the best what a Jodi team together can achieve..
Each moment every minute detail is fresh in my mind our first meeting..the day u were signed,the first outdoor ,the first scene..
The Nervousness excitement which carried foward each day..
The achievement the awards..
The desire to give our best ..thru toughest schedules..trying times made easy with enthusiasm positivity synergy together..
The toughest days..the brightest days..
The good days the not so good..
I held ur hand ..u held my hand..
NO we held each other’s hand.. irrespective of what comments .. we knew the truth …our unconditional respect and faith remained Supreme..
And so much more……
Hatts of to the entire team of
Star Plus..yrkkh writers creatives director editor dop stylist music production ..the unit crew
How all worked together for and with u and we together created the best chapters…ur hardwork dedication made every moment exemplary
Special thanks to the fans viewers audience who made u me and us 🙏

This Rishta Will Remain..
Like I told u ..we will not say goodbye or thank u to each other or say farewell ..as the Journey has just started together
Thu Thu Thu
A rishta which goes beyond a show a character or jodi..
Like I said to u both my main responsibility and concern for u both starts now ..when “kids are not home”😊
But home will always be home DKP😊
“and our journey has just started so no goodbye to fans or viewers..😊 🤞🤞🤞
Extremely happy and proud of u both.
May God give u the very best always 🙏
Regards And Lots Of Love
Mohsin And Shivangi 🤗🙏👍
Thu Thu Thu.”

Soon after his post, a lot of celebrities and fans commented on it and called Shivangi and Mohsin the best jodi on Indian television.

Shaheer Sheikh wrote: Most loved jodi of Indian television @khan_mohsinkhan and @shivangijoshi18. And the man behind it @rajan.shahi.543.

Rupali Ganguly: The best jodi ever on ITV. So much to learn from them. @khan_mohsinkhan such a gentleman and @shivangijoshi18 there is a special connect with you. And ur heartft words in this appreciation post @rajan.shahi.543

Adhvik Mahajan: Beautifully written sir… best wishes to you three and YRKKH team for an amazing future ahead.