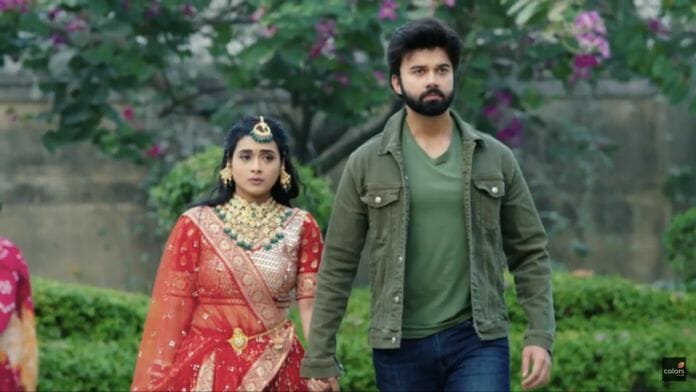 At the beginning of the episode, Geetanjali sees Dilip and asks him to come inside the house. She further asks him about his son. Dilip tells that his son’s name is Mayank and he is preparing for IIS. He adds that his son is very hardworking. Geetanjali tells him that she wants his son to get married to Aditi. Dilip is shocked to hear this. On the other hand, Gagan comes home. Radhika sees that he is very worried and asks him the reason for his trouble.

Here Dilip tells Geetanjali that if she wants Mayank to marry Aditi, then he has no objection to this. Geetanjali says that she wants them to get married today. Here Gagan tells about his love story to Radhika. Radhika tells him that her parents are very simple and if he refuses to get engaged to her, they will get her engaged to someone else. That’s why she wants him to get engaged to her only. But if he wants, he can also refuse. Gagan looks on.

Saying this Radhika leaves from there. Dilip asks Geetanjali why she wants to get her daughter married so soon. Geetanjali says that since Aarav and Simar’s marriage has brought a lot of stigma to their family, they want Aditi to get married to a good boy as soon as possible. Dilip says ok and leaves from there. Aditi gets sad seeing all this. Whereas Simar tells Aarav that this is unfair and they should not let this happen to Aditi.

She says Mayank is a good boy so they don’t need to worry so much. Gajendra understands her point. Next, they all get ready to go. Sandhya asks Gajendra if Aarav can also come with them. Gajendra says that Aarav can come but Simar cannot. Aarav retraces his steps but Simar asks him to accompany them. Simar thinks that she should talk to Aditi.

She walks towards Aditi’s room. Geetanjali Devi follows her. She says to her that she told her that this marriage will happen and she fulfils her challenge. Geetanjali adds that she hates Simar a lot but still she is able to stay in this house as she has held her weakest nerve. But soon she will take her away from Aarav as soon her real face will be visible to Aarav. Simar says no one can separate them.