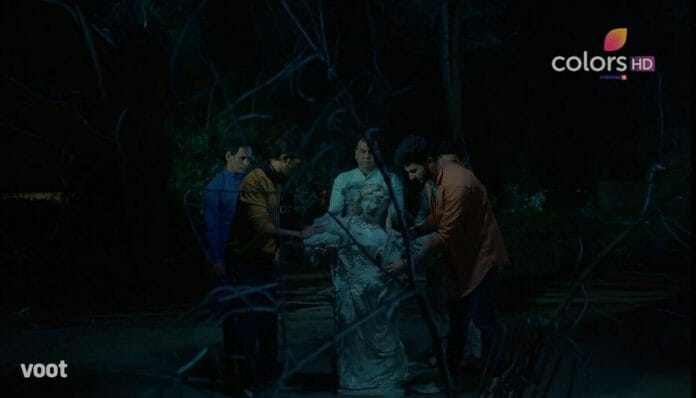 Colours TV’s popular Sasural Simar ka 2 show will show an interesting plot twist. Rudra and his team tries to break the Oswaal family for their own sake. But Simar doesn’t want to return the locket of Damini. While others are busy to celebrate the grand marriage ceremony of six couple, they evils enter to destroy the whole environment.

Meanwhile both Sandhya and Chitra are attracted to the Payel and Bangle respectively and start to behave like the Bengali bahu. Reema and Vivaan go to library to search more about the bangle and the statue. She finds that this bangle belonged to a Bengali zaminder family. Later, Badima emphasizes the expulsion of the statue again and Aarav will leave the house to destroy the artwork.

In the next episode, Aarav meets an accident as he goes out to destroy the statue. Everyone becomes thunderstrucked to see him unconscious. He was taken to the hospital, after many prayers and worshipping of matarani, Aarav opens his eyes.

Then he was returned to the oswaal home. Reema and Vivaan bring more information about the bangle and the statue from the magazine. Badima again orders to destroy the statue, as it is the main reason of all the catastrophe. Later, Sandhya and Chitra are compelled to take off their jewellery and they got their good sense back.

Vivan and Riyansh wraps the statue with combustibles like cotton and clothes. Badima arrives there with the jewelleries and give them back to the statues. Putting the fire on the statue, After setting the statue on fire, burning statue take shape of a dancing lady. Simar later notices that it is not totally burnt out properly, and the jewelleries were taken off from the statue.

Why didn’t the statue burn out properly? Why does Chitra look weird?
Keep following this space for more information about your favourite shows.