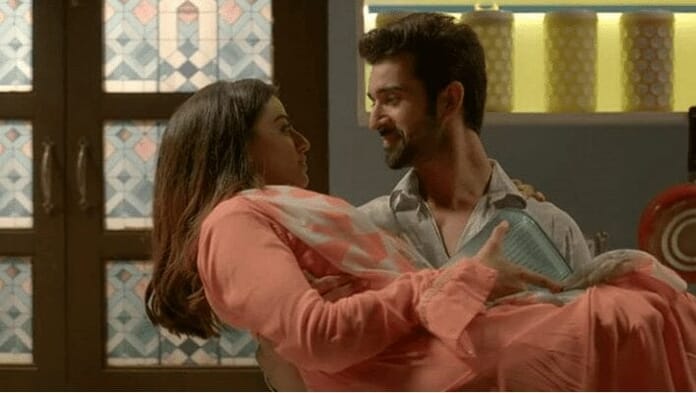 The episode starts with Zainab and Saltanat are thinking about how they will go inside of the marriage hall. Here and the marriage venue is all set and Kainaat is smiling looking at Zaroon. Neelam told Hamza that I don’t care about the match but we have lost here. Zainab says god please show us some way when Saltanat notices the architecture of the building which is pretty enough for her to reach the terrace of the marriage hall. On the other hand, some people inside the marriage hall are watching cricket on their phone and shout oh god we lost one more wicket. Miyajaan asks them to keep quiet during the marriage.
Saltanat went climbing the wall when Zainab asks her what is she doing? She said don’t stop to me as I have to do it for Zaroon. Saltanat remembers Zahran words that he loves a fierce lady who used to fight for her rights. She says you love this bold Saltanat Zaroon and now your Saltanat is coming to you.
Here inside the marriage hall, Maulvi Sahib says that marriage is not only celebrated between two people but two families. It is a divine creation of God who binds two people in a single thread for a lifetime. Zaroon prays to god that he is clueless about what he is doing, show him the path of light. Here Saltanat remembers Zaroon prayer while binding the thread in the masjid. She continues to climb up.
Saltanat richest the terrace when Kainaat says “Qubool Hai” three times for her marriage. The commentary of cricket comes from behind that Pakistan needs to hit a six in the last ball. Sabina asks Qazi, sahib, to wrap up the proceedings of marriage soon. The commentator says Pakistan hits a six in the second last ball too. Qazi sahib comes to Zaroon for his side of “Qubool Hai”.
Qazi says Zaroon Shah when Saltanat opens the window of the terrace and shouts Zaroon’s name. The microphone gets some technical problem for which everybody is having a problem to hear anything. The cricket commentary comes from behind and Saltanat flips and falls on Zaroon’s lap. The commentary announces that India wins the match and everybody rejoices when Saltanat says that we won Zaroon. Kainaat fumes in anger.
Saltanat says love doesn’t search the people with whom we can spend our life but its search is the people without whom we can’t even be alive. She announces that is Zaroon Shah is not approve the marriage.
Saltanat proposed Zaroon in front of the people and Zaroon accepted it as well. The title song of the show plays in the background. Miyajaan shouts that what’s this rubbish going on? Zainab stops Kainaat and says without making any scene just leave from here or else I will not spare you.
Everyone started to shout what is happening here? How they can behave like this in front of people? Miyajaan gets angry and leaves from there. Zaroon and Saltanat follow them as well. Kainaat makes faces and tears her garland.
Precap: Miyajaan is scolding Zaroon and Saltanat. When Zainab steps forward and says she is not responsible alone. Kainaat listens from behind.