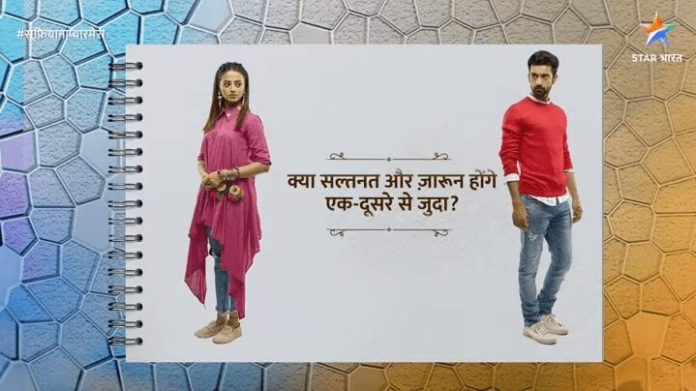 In an exciting episode of Sufiyana Pyar Mera, Saltanat will succeed in her full proof plan of deceiving Humza where she disguises herself as Kainat. Humza totally falls in for her deceptive act and believes Saltanat to be Kainat and takes her words as Kainat’s sincere wish. Now from Humza’s point of view, which man would go on with a proposed marriage when his to-be-wife confesses her love for someone else. He agrees to refuse the marriage proposal in front of everyone so that Kainat won’t be trapped in this unwanted situation.

Though successful in dodging the imminent marriage proposal put forward by Zaroon’s cunning plotting, Saltanat will herself be in dilemma. As already hinted in earlier episodes of the series, Saltanat too has a soft corner for Zaroon in her heart. Despite knowing that Kainat crazily loves Zaroon, Saltanat guiltily reciprocates Zaroon’s feeling of love and passion for her. On the one side, she has saved Kainat from possibly marrying Humza, on the other side her intention of getting Kainat’s wish of marrying Zaroon might hurt her own self.

With all these dramas coming our way, the show is getting more and more interesting with every episode. The upcoming storyline and this triangle in the love story are sure to keep audiences hooked to their screens. It will be much fascinating to see how the character arcs will turn for each of them. What will Zaroon do after his plan fails? How will Kainat react to Humza’s rejection without her doing anything? Will Zaroon and others come to know the truth of Saltanat’s plan? What else will Saltanat do to bring Kainat together with Zaroon besides sacrificing her own desires?

Tune in to Star Bharat to catch more of this beautiful love saga and keep following this portal.