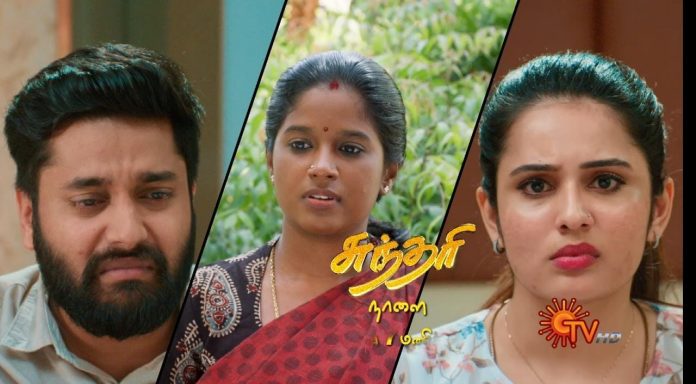 Sun tv fame Sundari serial never fails to entertain its audience since the first episode is now gearing up for further drama. Now serial concentrating on Sundari will learn the truth!

In Today’s episode we see; Subbu reveals to Karthick that Sundari coated that tender. Karthick slaps him in anger for not informing him about it before. He says that he was about to swear on his unborn baby and Anu to prove himself unaware of the truth. What if something would have happen to them?

Karthick tells him that his love on Anu more important to him then the hate on Sundari. He warns him to don’t repeat it and demands him to walk back to office. Later Sokku asks Sundari why didn’t she pick up his call? Don’t be angry at him. He swears to her that he placed that tender cover in drawer.

Sundari tells him that she is gonna leave from here. Sokku says to her that Sundari got tender he will talk with madam about it. Why should she leave without committing any mistakes.

Sundari notices Karthick in her cabin. She laughs at him seeing him in that condition. She teases him that he got obsessed with this post. Doesn’t he stoop low to fake swear on his unborn baby and Anu for this post? She adds that he is Inhuman. Karthick shares to Sundari that he was unaware of the truth and believed Subbu. He learnt the truth now. Sundari teases him again.

Karthick asks her to leave from there. He asks her doesn’t she unqualified for this CEO seat. She won’t get job in others company she got this seat because of Anu. Sunsari says that this seat is nothing in front of her because soon she will sit on collector chair. He can’t able to push her down from that seat.

In the upcoming episode viewers will see; Sokku will meet Sundari and inform to her that as he expected Subbu stole the tender paper from his cabin. Sokku will tell her that this paper enough to prove her innocence! Sundari will share something secret to him. Later Karthick will apologize to Anu and says he done mistake.

What will happen next? Will Sundari take revenge on Karthick? When will Karthick get caught?