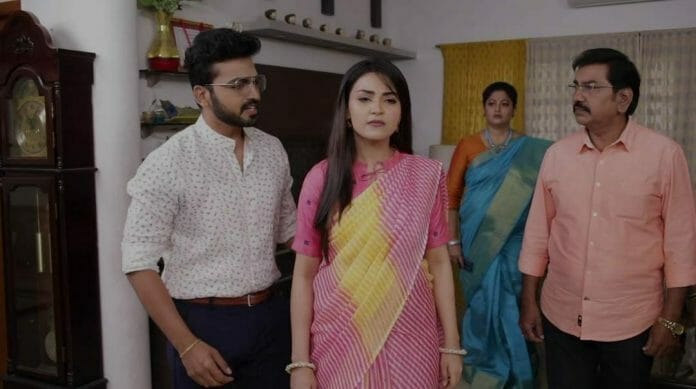 Previously, it was seen that  Arjun family asked Arjun what happened, why Karthi didn’t purchase the factory on his name. Arjun explained him what had happened. He said that he had misjudged the brothers bond. They decided not to plot anything for a while else the family might get suspicious of them.

Kodhai and the family had lunch together to celebrate the purchase of the new factory. Arjun and his family got irritated when Kodhai expressed her joy and praised Saraswathi.

Meanwhile, Chandrakala met Adhi in jail and shared with him how the plan had flopped in the last minute. She regretted trusting Karthi.

Chandrakala planed to join hands with Arjun who seemed to have an hidden intention against Kodhai family. However Adhi wasn’t pleased to hear this. Here, Saraswathi shared her doubt about Arjun to Tamizh.

In today’s episode, it’s seen that Tamizh shares with Namatchi his conversation with Saraswathi. Namatchi agrees with Saraswathi and says that he has also suspicion on Arjun.

Tamizh enquires Karthi and learns that He didn’t ask help from Chandrakala. He wonders how Chandrakala knows about Karthi selling the factory. He wonders whether Saraswathi was right about Arjun. He questions Arjun about it.

Arjun gets nervous, but manages to lie. However, Tamizh’s doubt isn’t cleared, but at the same time he can’t be sure that Arjun informed Chandrakala. Arjun understood that Tamizh started to doubt him. So he alerts his family. His family phones Chandrakala and asks her to come home and handle things.

Chandrakala arrives at Kodhai’s house. Saraswathi asks Tamizh to question Chandrakala about who told her regarding Karthi buying the factory. Tamizh also does the same. Vasundhara who overheard Tamizh and Saraswathi bursts out in rage and shouts at Tamizh and blames Saraswathi shocking the family.

What will happen next? Will Saraswathi be able to convince Vasundhara?