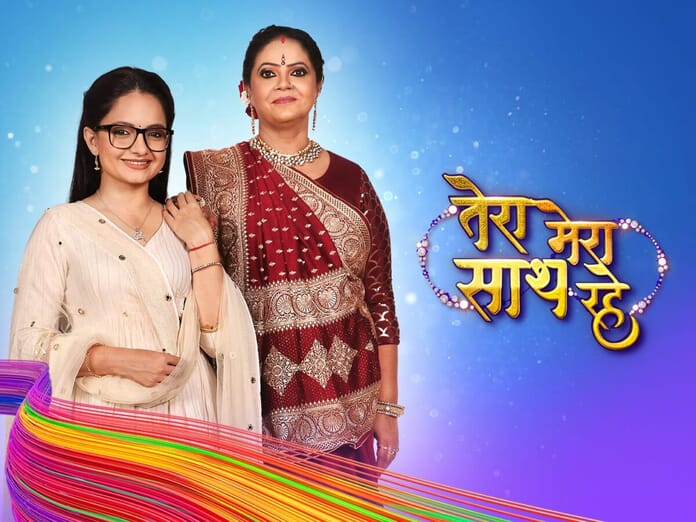 The episode starts with Saksham and Gopika sees a car. The car stops. Saksham asks the person inside the car they can get a lift till the road. Priya comes out of the car and said that she will give a lift to them. Saksham and Gopika gets surprised and shocked. Saksham says Priya? Priya jokes she is Priyanka Chopra. She then recalls how she punctured Saksham’s car and says that why he needs to reach the temple in his car when she has her’s. She looks at Saksham and Gopika. Saksham asks Priya what is she doing. Priya tells that she punctured his car so that she can act and gives him and Gopika lift in her car. Gopika tells Priya she dont have to do all this. Priya laughs and tells Saksham that his wife is really sweet. Saksham tells Gopika that Priya is just joking. He then asks again Priya what is she doing. Priya tells Saksham that she is going for a meeting and now they both are in middle of nowhere she will give them a lift. She also asks Saksham to not to deny this help of her’s saying she must get late to go to her meeting. Saksham tells Priya that he wont say no when his friend is ready to help him. Priya smiles and asks Saksham and Gopika to sit in the car. In the temple Mithila arranges everything for the puja and wonders why Saksham and Gopika is not reached the temple yet. Tejal goes to the room in which Hiten is already sitting infront of a hawan. She asks him why his mother called her that too with a condition that she has to bring her purse. Hiten tells that she doesn’t know. Ramila comes there and tells there is puja going to take place for a newly wedded so she called her here. Tejal says to Ramila that she isn’t interested and tries to leave but Ramila stops her and tells that she has to do this puja at any cost. Tejal questions her this puja is supposed to happen in the temple right. Ramila tells their house is not lesser than a temple so asks her to sit beside Hiten for the puja. Gopika asks Saksham what they are going to do their car. Saksham asks her to not to worry saying that he will call the mechanic they will service the car and bring it to the house. Gopika tells that she will go and bring her bag from the car. Priya looks at Gopika’s bag and finds the diary of Radhika’s and wonders why Gopika has it. She then moves to open the door for Gopika who sits in the backseat. Priya sits in a driver seat and look through the mirror the bag in which Gopika’s diary is there.

Ramila tells Tejal that at any cost she shouldn’t leave the puja in a mid way or else she has to go through God’s wrath. She also tells after her marriage with Anant he tried to leave the puja in midway and his health detoriates. Tejal jokes that Anants suffering started the day he married to Ramila. Ramila gets annoyed but forces a smile and asks Tejal to sit who sits beside Hiten. Tejal asks where is the Pandit. Ramila tells that she will guide them as a Pandit. She then thinks that she will make sure to get her money back from Tejal for sure. Priya asks Saksham and Gopika is anyone died because they both are silent. Gopika gets shocked and asks Priya to not to say such things. Priya tells that she understands she is here that’s why they both are not talking to each other. She then asks Saksham and Gopika where they met. Because during her college days Saksham is with her so she knows it’s not during their college days. Gopika opens her mouth to say something but Saksham interrupts her and tells that Mithila chose Gopika for him. Priya tells that Saksham is always the adventurous one in their college days and not even once she thought he will do a arrange marriage thing. She also asks Saksham and Gopika how is their relationship. Saksham tells Priya that they bot both are trying to understand each other about more everyday. Ramila starts the puja. She wears a mask when the smoke comes out from the hawan. Tejal asks Ramila to give her and Hiten a mask too as they are suffering too but Ramila tells that they have to to through all this. Saksham tells Priya the song is nice. Priya decreases the volume and questions where he and Gopika went for a honeymoon. Both Saksham and Gopika Gopika gets uncomfortable. Saksham gets a call from Mithila so he excuses saying that it’s a call from Mithila and he needs to answer it. He then tells Mithila that he and Gopika almost reached the temple. He then asks Priya to stop the car saying they have reached the temple. Saksham and Gopika comes out of the car. Priya also comes out and looks at Gopika’s bag. She suggests her not to take this inside but Gopika tells it’s too big to put it in the box so she will carry it on her own. Hiten and Tejal cough a lot. Ramila tells the puja is over and goes to Tejal and asks her to take the blessings from her also give money to the god as a offering. Tejal puts few coins so Ramila goes out and closes the door and tells that Tejal had to put all the money which is in her purse. Tejal accuses Ramila for doing this intentionally take the money from her. Ramila hears it and tells even her son inside suffering with her so asks her to do it what she told her. Tejal empties her purse. Ramila comes inside the room. Tejal leaves the room angrily.

Saksham and Gopika tells Priya they are going inside the temple. Priya tells even she is coming with them because God is for everyone. Saksham agrees. They all starts walking towards the temple. Mithila notices Priya is with them. Mithila questions Saksham what Priya is doing here because this puja is for married couple. Saksham tells Mithila that Priya is the one who helped them reach the temple. He also tells she is here to pray to the god. Mithila tells Priya that she wont stop her from meeting God at the same time she has to stay away from Saksham and Gopika. Priya obliges and thinks to herself it’s not Saksham but Mithila she will stay away from. Saksham and Gopika goes inside the temple. Priya goes to the other side and looks at the bag which Gopika has carried with her and tells God that God is saying she needs to solve this mystery of Radhika and she is going to oblige God’s words. She then takes the shawl from there and hides her face using that and goes where the diary is. Saksham and Gopika sits in the puja. The puja starts. Ramila gets happy that she got more money than which she already planned. Hiten asks why he has to become a victim of her plans everytime to which Ramila tells that they have to suffer a little to get what they want. Priya tries to take the diary but Mithila notices it so walks towards where Priya is. Priya decides to leave the place before she gets caught so she runs away. Mithila asks her to stop it and follows her behind. Mithila thinks she is hiding behind a car but doesn’t find her so she starts wondering who it is. Priya gets angry and thinks Mithila is trying to act as a detective at this age of hers which isnot necessary. Mithila recalls the footwear of the person is similar to Priya then scolds herself for thinking bad about priya and goes inside the temple. Saksham and Gopika forwards their right hand as per the priests instruction. Then they both prays to god. Saksham prays to god that he dont want to become like Keshav so he decides to give a chance to his relationship with Gopika. Gopika prays to god to help her to get to know more about Saksham and not to do anything that will upset Saksham. Saksham prays that his heart is not ready to accept anything but his mind is ready so asks God to help him fulfill the promises he made to Gopika. Gopika prays that today is the day she is going to end everything that separated her from Saksham. Then they opens their eyes and decides to put the flower in the hawan as per the priest’s instruction and looks at each other.

Precap: Gopika throws the designs of hers as Radhika saying she is going to put an end to this. Saksham comes there and finds Gopika’s design. He then asks the person is she is Radhika.