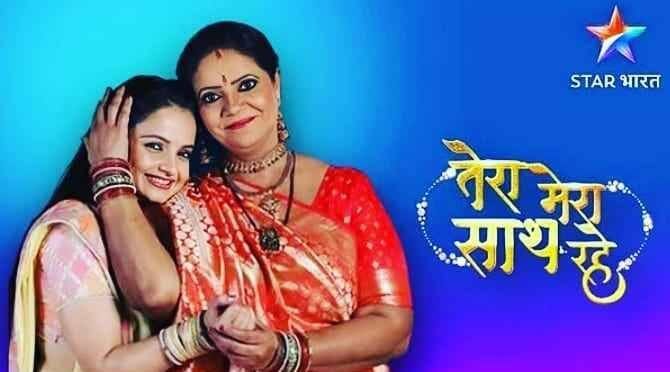 This week Tera Mera Saath Rahe episode starts with Gopika says to Mithila that she learnt to value the relationship since ver childhood. After meeting her she learnt to value the self respect so she has to leave the house and starts walking towards the exit. Ashi in her room says that she is happy because now she is the only daughter in law of this house who will be everyone’s priority but gets upset when the light goes off but she decides to do her make up in the dark. Mithila asks Gopika the relationship she made in this house what she is going to do to which Gopika tells if she answers to her this question then she may not able to leave the house so asks her to let her go then leaves the house. Baa asks Mithila why the house is dark to which Mithila tells when the house Laxmi leaves this is what happens.
Saksham asks Mithila how could she call Gopika who is a liar as Laxmi of the house. Mithila tells Saksham that she dont have to tell him the answer and ask him to see why the light went off. Ashi comes to take the blessings of Baa and Mithila saying she is the one hereafter has to fulfil the responsibilities as a daugher in law but Mithila scolds her for scaring Baa with her make up and asks her to work on her responsibilities instead of applying make up. Ashi obliges and leaves the place.

Gopika goes to Ramila’s house where Ramila stops her saying she will take aarti. She then mocks her saying that she forget to light up the Diya before taking aarti. She also tells to light up the Diya needs ghee too. Tejal gets happy seeing the way Ramila is treating Gopika. Ramila asks Gopika to clean the house. Anant scolds Ramila but Gopika tells it’s her house too. Later Gopika breaksdown infront of Anant and Hiten saying she wanted Saksham accept her for who she is but instead of that she has to leave the house. Anant tells that Saksham fails to see her values so its Saksham’s mistake not hers.

He also tells that she has to move on in her like how she used to. Later Gopika goes to her and gets surprised seeing the rooms appearance. Tejal comes there and starts scolding Gopika and burns the clothes thinking its Gopika’s but when she learns it’s not Gopika’s she urges Hiten to bring water who does and off the fire. Ramila supports Tejal and asks Gopika to sleep in the kitchen. Tejal gets surprised and wonders why Ramila is supporting her. Ramila thinks that she will get what she want from Tejal but she will never get to know her intentions.

Gopika arranges bed to sleep in the kitchen. Mithila cries infront of God asking how to rectify the mistake she has done. Baa asks why she didnt stopped Gopika to which Mithila tells that Gopika told her that its between her and Saksham also about her self respect so she can’t able to do anything but let her go and cries. She tells that she made a mistake but she will rectify it by bringing back Gopika again to this house at any cost which makes Baa happy. The next day Gopika wakes up thinking Mithila must be angry on her because she over slept but realises she is not in the Modi house and gets sad.
Ramila asks her to do all the chores also asks to prepare food for everyone which Gopika obliges. Ashi fails to put fresh flowers for puja also she serves tea which has sugar in it to Baa which angers Mithila who scolds her. She then asks her to prepare food for everyone because their workers are on leaves. Ashi agrees and decides to order food in the online but when the food delivery app shows the food will deliver later than it already mentioned Ashi gets worried and starts preparing food.

Gopika thinks how everyone in the Modi house is doing also thinks whether Ashi is taking care of everyone’s need properly or not. Ramila tells that they have to make Tejal feel like it’s her home too so there is nothing wrong in Gopika making many food items like the Modi’s when Anant tells Gopika that she dont have to prepare all this. She then tries to manipulate Tejal by asking her to ask her parents to buy her the things she wants but Tejal understands her intention so tells that she is happy with the things she has already. Ashi messes up with the breakfast so Mithila tells after Gopika left this house everything went upside down but Saksham tells her that before Gopika entered their life also everything went smoothly so there is no need to say that without Gopika nothing will happen properly.

He then decides to order food in online. Ashi video calls Ramila and complaints how much work she has to do. Mithila comes there and sees Gopika is behind Ramila so tells her that first time they are ordering food outside because of Ashi and leaves the place. Gopika gets worried. Mithila tells Baa that she Hope’s Gopika returns to their house today itself.

Saksham Baa and Mithila gets surprised seeing Hiten is at their door step. Hiten tells them that he went to temple where he got prasad so he decides to give it to them too. Mithila invites Hiten and asks Saksham to cancel the food order saying they can’t waste the prasad. Saksham obliges. Ashi seems glad that Hiten bought the prasad. Baa tells Mithila that Saksham tella he don’t want Gopika in his life but eating the food made by her with so much interest which tells otherwise.
Mithila gets emotional having the food made by Gopika. Later she and Baa confronts Hiten. Hiten recalls Gopika asking him to give the Modi’s the food made by her. He apologises to Mithila for lying to her also tells that Gopika don’t want anyone to know this. Mithila assures him that no one will get to know about this. Hiten leaves the house thanking Mithila and Baa. Mithila praises Gopika and tells that she failed to notice Gopika’s goodness. She also tells Baa this is the sign that Gopika will return to their house soon. Baa also prays to god for the same. Hiten tells Gopika that Mithila knows it’s her who send the food but she assured him that she wont tell anyone so asks her not to worry.

Gopika goes to Ramila when she calls her. She tells that their ration went missing. Gopika tells its her who made food to the Modi’s using the station which angers Ramila so she starts scolding her but when she sees Tejal she tells Gopika that she did a good thing but helping the Modi’s because now they are also their family now. Tejal gets tensed when Ramila asks her where she is going. She tells that she is going to the parlor and leaves. Gopika tells Ramila that she will buy the ration for a week with the money she saved and goes to the market. In Modi’s house Mithila tells that when the Laxmi of the house leaves this is what happens when the men in the family tries to solve the messes done in the business. Saksham leaves the house to go to his office.
Gopika sees Tejal at the cafe so she starts going toward her but stops when she hears Tejal telling someone that she lied to the family members to come to meet so Gopika gets worried thinking whether Tejal is making mistakes. Saksham’s car gets stuck in the market so he decides to go to the office walking. Mithila recalls Gopika’s moments and tells that she misses her a lot and she wants her daughter in law back and seeks God’s help.

VJ shows Tejal that Gopika is following her which angers Tejal also she gets worried that she may get caught but VJ tries to calm her down. Saksham finds Radhika’s drawing in the market so he calls Radhika thinking she must be in the market. Gopika gets surprised seeing Saksham is calling her. Saksham looks behind to see whether Radhika is there when Gopika didn’t answer the call. Gopika looks at the mobile in her hand. Saksham searches for Radhika and sends her a message saying that he and his wife Gopika get separated and he is feeling light now also he wants to talk to her but Gopika doesn’t see the message and makes an exit from the shop by putting the mobile inside her bag.

Gopika argues with the auto driver and when she decides to complaint she gets hit by Saksham’s car. The people there starts accusing Saksham which lead him to tell everyone that Gopika is his wife. Gopika tells that he is here to pick up her so they all leaves the place. Saksham helps Gopika which worries Ramila. He then helps her get an auto. Gopika decides to return the auto fare he gave her but gets shocked seeing the interaction of Saksham and Priya.

Mithila prays to god to make everything normal. Ramila decides to teach Gopika a lesson. She scolds Gopika after she returns from the market also mocks her saying the broken Mangalsutra has no meaning so asks her not to dwell in that and work. She further says that Gopika has no relationship with Saksham and the Modi’s. Mithila goes to meet Gopika where she hears Gopika saying Ramila that her relationship with Saksham is not over also Saksham will be her husband for life. She gets happy. Mithila advices Gopika to fight for her rights and never think that she wont get succeed before trying.

Saksham decides to go to Priya’s house when she tells him that she lost her mother also her uncle is ill. Priya scolds her uncle because their lies may get caught. Saksham spends some time with them. Mithila reprimands Ashi from wearing Gopika’s jewelry and tells everyone that Gopika will return to the house tomorrow which shocks everyone. Mithila calls the media and tells them that Mithila thrown Gopika out of the house and harassed her a lot. Saksham mistakenly calls Gopika instead of Mithila and tells her his meeting with Priya also asks about his file. Saksham gets shocked when he realises that he talked to Gopika not Mithila so he apologises and cuts the call.
Gopika gets shocked seeing the news where Mithila is accused by everyone for throwing Gopika out of the house. Modi’s house outside people will gather and chant against Mithila. Mithila asks God to help her bring back Gopika sayind she put her reputation at stake with the only hope that Gopika will return to their house.

In the next week viewers will get to see that Mithila and the family members of hers will come out of their house. The ladies will surround Mithila. One of the lady will throw ink towards Mithila. Modi’s will get shocked. Saksham and Gopika will reaches the house. Gopika will scream Maa Ji.