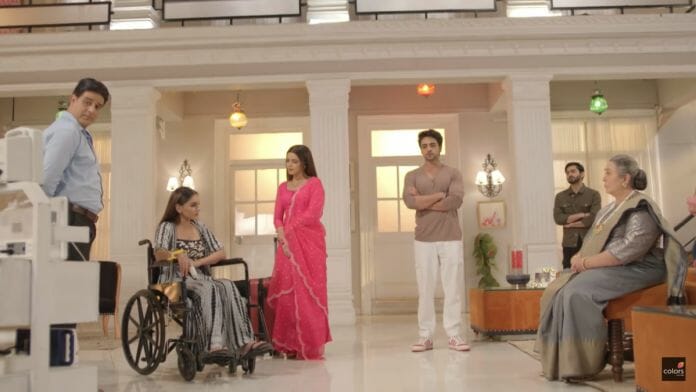 Colors TV popular show Thapki Pyaar ki 2 is attracting viewers with an interesting storyline, Family members blame Thapki for Sargam’s condition and this track has glued the audience to screens.

As reported earlier it’s shown, Thapki brings Sargam’s diary but it’s changed by Hansika and her Mom. Everyone believes Thapli is wrong. Veena slaps Thapki and tells from here onwards she is not daughter in law of the Signhania family and she ends their relationship with Thapki. Hansika and Anjali smirks. Purab tells I can’t help you as you’re responsible for my sister’s condition and you broke my trust, what to name our relationship when there is no trust. Jaya takes Thapki with her. Hansika and her Mom drinks the champagne for their victory then Hansika calls Thapki and tells her that victory will belong to her type and she asks Thapki to change her ways and she warns her to never enter in Singhania’s house. Thapki goes to maata rani idol tells Jaya that she needs to save her Sasural from Hansika and she decides to expose her crimes.

In the upcoming episode, viewers going to witness that Thapki will asks Purab to give her  a chance to prove her innocence then Purab agrees and asks her to do whatever she wants. Thapki will tell she wants to get Hansika’s Lie detector test done then Purab says if you prove wrong after this test, then you shall leave this house forever. Thapki agrees. Hansika will seated for a test, Thapki questions her if she plans to get Purab? Hansika says no. Red light beeps. Thapki asks if you have plotted with Rohit against Sargam. Hansiks says no.

Will Thapki prove her innocence? Can Thapki expose Hansika?