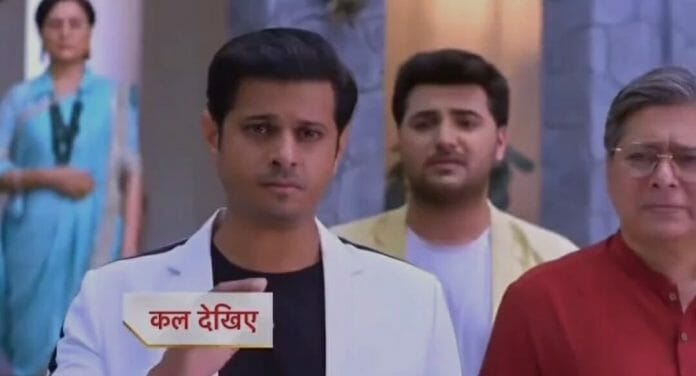 Star Plus popular daily soap Ghum Hai Kise Key Pyaar Meiin have garnered a huge amount of audience. The gripping storyline filled with twist and turns makes it engaging to the viewers. Previously, Sai called DIG sir in order to take his help, while the latter confronted both Virat and Sai regarding Savi’s matter.

Virat filed an FIR against Sai and decided to drag the matter to the court, while both blamed one another for the situation. DIG sir promised to help Sai while the latter determined to get her daughter back.

In the current track, Virat sees a nightmare and thought that Sai with the help of Jagtap took his daughter away. Meanwhile, at that time Savi comes there and tells that she was inside the washroom. Virat shows his concern towards Savi and becomes emotional, while the latter demands to see her mother.

Here, Chavans somehow tries to console Savi while Ninad advice him to rethink about his decision of punishing Sai. Meanwhile, Virat tells about his schedule with Savi to Pakhi while the latter reminds him about spending time with Vinayak also.

Pakhi says that she also wants to be with them and makes Virat realise that he forgot about others after the arrival of Savi. He denies her allegations and ask Pakhi to come along with them. He also finds about her dress catching fire while cooking and shows his concern towards her.

Ahead, Savi wakes up and Virat goes away leaving Pakhi. She gets disheartened but controls her emotions. Meanwhile, Savi keeps demanding about meeting Sai and cries while Virat tries to assure her but fails. Ashwini somehow controls Savi and assures that her mother will come soon.

Savi ask Vinayak to call Sai while the latter hallucinate about Savi inside the jail. She sees that her daughter is angry at her for hiding the truth and keeping her away from her father and his family. Sai tries to explain it to her and then breaks down.

Later, Jagtap comes to meet Sai while she lashes out at him and blames him for the situation. She gets unconscious while they puts her outside the police station. The lady officer goes to check on her but becomes shocked upon realising that she escaped from there. Whereas, Sai determines to bring Savi back from Chavans house.

Now in the upcoming episode, Virat will play hide and seek with Vinayak and Savi. He will start counting and ask the kids to hide, while at that time Sai will come there. Savi will see her mother and calls her name, while Virat will become shocked. Savi will go towards Sai while the latter gets emotional and looks after Savi. She will ask if the latter is fine? To which Savi expresses that she missed her. Sai will assure that now no one can separate them and glares at Virat while he will get teary eyes but stops himself from doing anything. Meanwhile, Chavans will also come there as well as the police staffs also gathers there. Whereas, Sai will take Savi away from there and Virat will keep looking at his daughter being emotional.

Will Virat be able to stop Savi?

Will Sai will get Savi’s custody?