Anupriya spit it out than Kalyani also spits it. Anupriya thinks why you are doing this Kalyani, how to tell you that your Aayi is ill fated. Anupriya beats Aaosaheb tell her to not show her face to me and leaves. Kalyani says why is Aayi talking in this way.

Malhar stops Durgaprasad than gets angry on Avni for wearing Kalyani’s earring. Avni apologies to him. Malhar takes his medicine. Avni asks is it belongs to his first wife? Says she don’t know anything about his past except Moksh.

Malhar says there was nothing in his life other than Moksh to reveal her. Avni says to her unborn baby that don’t feel scared, your dad is good sometimes he gets angry. Malhar goes out and reminsces his moments with Kalyani while seeing ear ring.

Kalyani asks why Aayi is behaving in this way, I want to know reason behind my Aayi behaviour. Aaosaheb consoles her and asks her to stay with them. Kalyani feels happy but asks what about Aayi. Aaosaheb says she will manage Anupriya. Kalyani happily hugs her. Aaosaheb asks Godavari to go with Kalyani to help her in packing and she thinks to use Kalyani as her weapon to ruin Malhar.

Godavari checks Kalyani things. Kalyani thinks whether her Aayi is strucked in any problem. Kalyani gets call from Darshan and says she won’t go to lunch to any minister place and asks them to meet her at office. Godavari says I’m proudly saying to my friends that my sister is new DM. Kalyani asks her to pack her things.

Godavari says did you know that I completed my law course. Kalyani says even I congratulate you and tell me did Aayi continued her studies. Godavari says she left everything after hearing your demise news than she gets call from Swara. Kalyani hears Godavari addressing as Aayi and asks why you address her in that way.

Godavari says her dad married Swara because of situation. Kalyani loses her balance. Godavari asks are you fine. Kalyani asks what’s that situation forced Vikas to marry Swara when Pallavi chachi Is alive. Godavari says Pallavi health is not good. Kalyani madly cries saying so much changed in these 5 years. Caretaker takes things to car. Godavari says Kalyani will come with her. Kalyani cries thinking about what Malhar may felt after knowing Swara marriage with Vikas.

Malhar brings Kalyani things to Aaosahebs place. Aaosaheb asks her servant to bring tea for Kalyanis servant and she mocks him saying wait until Kalyani arrives otherwise what if dome things miss from her luggage?

Than she can’t search those in your poor house. Malhar gets angry and throws Kalyani things and asks her to call Kalyani and says he’s government servant and won’t steal anything and his salary is enough for his family.

Kalyani enters with Godavari and notices her things are shattered. Aaosaheb complaints saying Malhar is behaving in wrong way. Malhar asks Kalyani to check her things. Kalyani feels sad thinking it’s not your work to get these things and can’t see you facing insults. She asks why you get my things.

Malhar says I’m doing my duty as your personal servant. Kalyani says don’t touch my things and shouts on her servant Raghav for not bringing her luggage and she asks Malhar to leave.

Malhar says don’t show you’re sad because I saw your reply for my Rakhi letter and reminsces how he got her hair. Swara silently cries.

Aaosaheb enjoys it from side and he leaves. Kalyani comes to Swara and asks why you did it. Swara says these people lost Nal because of Malhar mistake so I’m serving them to reduce our burden.

At dining table Kalyani asks where is chair for Anupriya.Godavari sats Aayi won’t have food with us. Kalyani asks what. Aaosaheb says Anupriya is Annapurna and she haves food after everyone completes their dinner. Anupriya gets Rotis for them. Aaosaheb asks why didn’t she prepare Kalyani favourite food.

Anupriya says she don’t know outsiders choice. Aaosaheb says than you can asks me, prepare sheekand for Kalyani. Pallavi asks did she know it. Vikas says what else she knows more than cooking plus she can’t even earn. Kalyani says most of our country people think about you and men are earning because woman are working at home, it’s also hard work.

Anupriya says their is no need of outsider to take stand for me and leaves. Kalyani asks Aaosaheb about Anupriya room and says she gonna live with her. 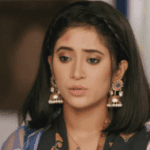