Episode begins with Anupriya saying that she won’t let her die and jumping into the pool. Kalyani panics and asks her to stop. Malhar also jumps into the pool supporting her followed by Sarthak. Moksh also does the same. They hold eachother’s hand and tell uttarakanksha that they don’t complete the family but family completes them. Uttarakanksha tells them that she will Kill everyone as hse don’t mind them dying. She is about to throw the wires into the pool but gungun throws stone at her because of which she falls into the pool and kalyani holding her, shwos her the police who came to arrest her. Later police arrest her and the family hugs eachother happily.

All of them are about to enter the house but Kalyani stops them. She brings aarti plate and does aarti of her. She then brings kumkum water and asks gungun to step into it but she jumps into it shocking everyone making the water spill everywhere. Sarthak is about to say something but Kalyani stops him. She asks her to step forward but she steps backwards shocking them, when asked she answers them in a different way making Kalyani worried.

Everyone is sitting in the hall, when Sarthak brings asawari’s laguage and asks her to leave as she didn’t changed and lied to him. She is about to leave. But gungun hugs her and cries standing stubborn on her point that she won’t live without asawri. Anupriya consoles her and tells her that she will do whatever makes her happy. Sarthak leaves from there frustrated. Gungun watcehs him go.

Gungun and Moksh are playing candy crush together when moksh asks her the reason for letting asawri stay with them even after she hurted her. Gungun tells him that she will not let her go without getting back at her. Moksh smiles. Kalyani calls them for a photo.

Kalyani is calling everyone into the hall while Anupriya is asking her as to why she always does this and how such thoughts come into her mind. Kalyani sits beside Anupriya in the chair while everyone is standing but gungun proposes to sit on the chair and Anupriya asks her to sit which hurts her. She then brings Asawari for the photo. Malhar sides hugs Kalyani and Sarthak.

Anupriya and Gungun are making rangoli when Kalyani comes there. She gets upset seeing them. Anupriya consoles her. Anupriya asks her the reason for her behaviour to which Kalyani tella her insecurities to her. Anupriya asking gungun to do the rangoli takes Kalyani to kitchen. She tells her that they will have tea together but pours plain water into their cups, when asked she tells her that she is incomplete without her.

Everyone is infront of Ganesh Murthi doing Pooja. Gungun shows a spray to Moksh and takes him away seeing everyone busy. Screen Freezes On Kalyani’s and Malhar’s Face 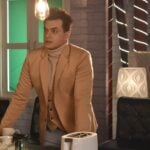 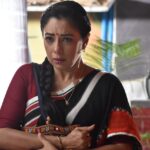 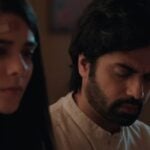 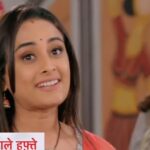