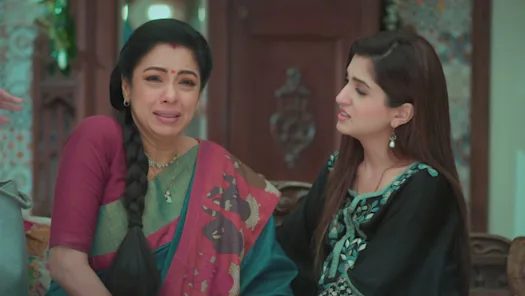 Drama to galore in Anupama with Anuj slipping into coma. Anupama will vow to take care of paralyzed Anuj

In today’s episode, Samar thanks Anuj for funding for him. Anuj asks Samar to be quiet. He asks Samar to keep the talk between them. Samar says to Anuj that he will return his money with interest. Anuj asks Samar to enjoy the phase. Barkha over hears Anuj and Samar’s talk. She think for Anupama’s kid Anuj is funding and for her family he is about to make an announcement. Barkha worries about Anuj’s decision.

Vanraj and Leela stops Pakhi from going to Anupama’s place. Anu discloses she has invited Hasmuk and others without their acknowledgement. She feels sorry. Anupama and Anuj ask Anu not to be sorry. Anupama adds Anu wants to end the fight. Hasmuk, Kinjal, Kavya, Jignesh and Dolly enter the house. Hasmuk says Anu invited him thus he is here. Anupama gets overwhelmed seeing her family.

Elsewhere, Leela gets irked with Shah’s visiting to Anupama. Vanraj sit stressed thinking his family left him and went to Kapadia’s. Anupama along with Shah’s and Kapadia’s, celebrate Rakhshabandhan. Anupama gets elated seeing Bhavesh.

In the upcoming episode, Anuj will meet with an accident. He will slip into coma. Barkha and Ankush will disown Anupama. Anupama will decide to fight back. Will Anupama be able to manage things in Anuj’s absence? Time will only tell.