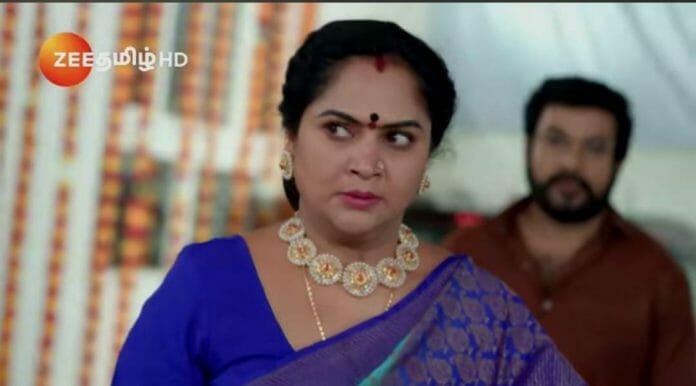 Zee Tamil’s popular show, Vidya No1, is gearing up for drama with Vedavalli bursting out in rage.

Previously, it was seen that Vedavalli refused to accept Vidya as her daughter-in-law and tried to remove the nuptial thread from Vidya’s neck to ask Sanjay to tie it around Preethi’s neck. But Vidya held Vedavalli’s hand shocking everyone.

Vidya opposed Vedavalli’s decision and refuses to remove the nuptial thread and said that she’s ready to die for that. Chandramohan, Suryaprakash, Vedavalli’s sister and Mayi tried to convince Vedavalli to accept Vidya as her daughter-in-law, but Vedavalli angrily walked away.

Later, Vidya was disappointed that they all got her married to Sanjay by cheating and turned her against Vedavalli. Chandramohan, Suryaprakash and the family try to make Vidya understand that they didn’t have any other way. Preethi vowed to make Vidya leave Vedavalli’s house and Sanjay’s life.

In today’s episode, it’s seen that Vedavalli stays adamant in her decision not to accept Vidya as her daughter-in-law.Chandramohan continues to argue with Vedavalli over this topic. Even Vedavalli’s sister tries to convince her. But Vedavalli is stubborn. She asks Vidya to leave the house.

Vedavalli leaves Vidya’s hand. Media questions Vedavalli. Sanjay gets furious at the media’s questions and scolds them. She declares to the meditation his and Vidya’s marriage is a love come arranged marriage. He loves Vidya and on knowing this, Vedavalli got him married to Vidya.

What will happen next? What will Vidya do to win Vedavalli’s heart?

Will she be Successful?