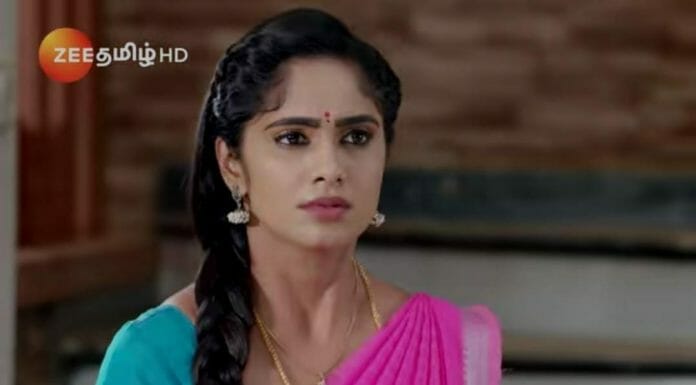 Zee Tamil’s popular show, Vidya No1, is gearing up for drama with Preethi planning to expose Vidya’s identity to Vedavalli.

Previously, it was seen that Suryaprakash argued with Vedavalli over Vidya. Vedavalli asked Suryaprakash to bring Vidya in front of her to which Suryaprakash says that Vidya would come to help her if Vedavalli was in any trouble. But she won’t come just because she wanted to see her.

Vedavalli gave a cheque to Suryaprakash as Chandramohan always mentions about Vidya helping her. She asked him to give the cheque to Vidya. Chandramohan asked Vedavalli to give Vidya by herself when she will come marrying Sanjay. Vedavalli said that will never happen.

Later, Vidya thanked Suryaprakash to come in right time and stops her from doing a foolishness. Suryaprakash revealed that Sanjay and Vijay called him here. Chandramohan was determined to bail out Mansa. But Vedavalli refused. They had fought over this.

Preethi and Abhishek reach the court for Manasa court hearing. They mock Suryaprakash and Karthik. Suryaprakash gave them an apt reply. Preethi plan to capture Vidya’s photo when she would come to the court to see Mansa and show it to Vedavalli.

In today’s episode, it’s seen that Abhishek and Preethi provoke Suryaprakash and Karthik by mocking them. They are sure that Manasa will be jailed. Suryaprakash gives them an apt reply. Suryaprakash threatens them to turn their life a hell if Manasa gets punished.

Manasa denies this and explains that she agreed to marry Abhishek when she didn’t know his real face. She learned his real nature when he forced her to sign in the agreement. She explains what that agreement is.

Manasa’s lawyer defends Manasa and asks time to get that agreement to prove Manasa’s innocence. The judge agrees and gives time till the next day evening. Vidya decides to enter into Abhishek’s house without his knowledge and gets that agreement document with the help of Karthik.

Later Vidya shares her plan to Chandramohan, Surya and Vijay.