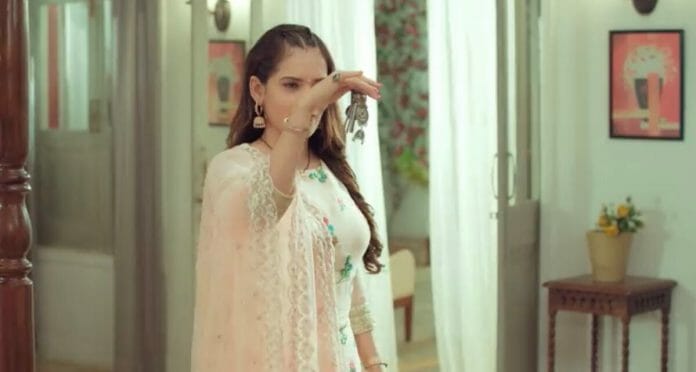 In the earlier episode, Bhavna gets jealous of Dia and steals her keys. Whereas, Madhu finds a buyer for her property and ask Dia for her papers which were kept inside the locker. Dia goes to bring it, but couldn’t able to find the keys. She gets worried and notify Armaan about it, while he tries to calm her. He helps her to search the keys, while Madhu starts taunting Dia and tags her to be useless. Meanwhile, Bhavna enjoys seeing the sufferings of Dia.

Madhu keeps blaming Dia for ruining her deal and mocks her for being irresponsible. Whereas, Dia gets an idea and lies to everyone that she got the keys. She gives some false property papers to Armaan and prays for her plan to work.

Ahead, Bhavna gets shocked hearing Dia’s conversation and goes to check on the keys. She questions that how can Dia gets the keys and gets relieved upon seeing it with her. At that time Dia comes there and takes the keys from Bhavna, she also gives a warning to her which infuriated the latter.

Pawan taunts Bhavna by indirectly praising Dia. Whereas, she gets furious. Dia tries to manages her work as well as house chores and Jaggi gives her some important office work with the timelimit. She gets worried, while Armaan helps her in cooking and ask her to complete the office work. She shows her gratitude towards him, while Bhavna ploys to make Dia get fired from her work.

Later, Bhavna hides the charger of Dia’s laptop while latter gets tensed and somehow manages to get it. Meanwhile, Madhu comes there and makes Dia work for her. Whereas, Bhavna enjoys the drama thinking that Dia won’t be able to complete her work.

Now in the upcoming episode, Armaan will try to help Dia while he gets in call with Kajal. She will say that destiny always brings them together, while he tries to ignore her. She will request him not to be rude to her as it hurts her, whereas he stays silent. She will tell that she misses him and still loves him, while Dia gets shocked hearing it.

Will Dia be able to save her job?

Will Bhavna gets successful in her ploy?