Star Plus popular shows Yeh Rishtey Hain Pyaar Ke is gearing up for major drama with Abir knowing the truth about Kunal’s parentage. In the upcoming episode, Parul will confess that Kunal is her son and Mehul cheated on Meenakshi. She will explain that When Mehul was accused and ran away, she came to Rajkot pregnant. She was not aware Mehul was married and already has a son. She will tell Abir it was Meenakshi who gave them shelter and raised Kunal as her own. Abir will keep denying but Meenakshi will tell him that it is true Mehul had an affair with Parul and Kunal is an illegitimate child. She will tell Abir that she knew Parul is not at fault. Hence she raised Kunal as her son and gave him respect in society.

Meenakshi will give an ultimatum to Abir if he doesn’t leave Mishti, she will tell the entire world that Kunal is an illegitimate child and throw him out of the house. Parul will beg Meenakshi not to do it. Parul then begs Abir and will fall on his feet not to let Kunal know the truth. Abir will be torn.

The Maheshwari will reach Rajvansh’s house and Kunal will ask to speak to Kuhu separately. Nidhi will explain that since their house is getting renovated Kunal will need Kuhu’s opinion. Kunal will then apologize to Kuhu and will tell her that he will tell the truth to both families and apologize. Kuhu will tell him that she will handle it. She will say they have compatibility issues. She doesn’t want her family to know the painful truth. Kuhu will ask him if can give their relationship another chance. Kunal will give an excuse to pick up Abir and leave.

Kunal will find Abir in the temple where he will be worried. Abir will hug Kunal emotionally and tell him he is important to him than anyone else. 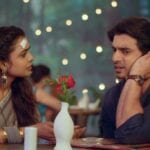 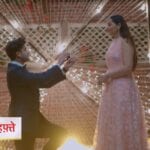 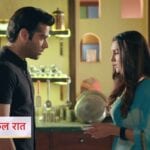 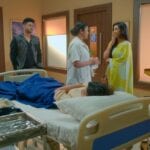