The episode begins with Rajvansh family is all set to oo party out the evening with some eye-catching and gorgeous decoration in the house. Abir comes down with Kunal and greets the family member, guest guests also start arriving. Nidhi asks Meenakshi where are the Maheswari family? They hear a car horn and thinks it must be them. To their disappointment, it turns out to be Mrs. Parekh, her arrival didn’t impress anybody present at the party. She taunts Meenakshi about expecting the Maheswari family there. She says Maheswari family just arrived at the club and they do not seem to be in a mood of a hurry. Meenakshi says you are not invited by choice so better to leave with dignity. She says why only me? everyone should leave. Nidhi comes forward and says your son’s alliance got rejected by us and that is why you came over to do all this drama.

Meenakshi tells her she doesn’t need to worry about her family, she is well enough to do it on her own. She says when his own mother is living a life of solitude without her life partner, how come the son will get a good partner for himself. Abir yells at her, she says my purpose of coming here is served. She leaves and along with her, all the guests leave as well.

Everyone in the house starts to wonder why Maheswari family did not turn up for the party? Everyone starts to blame Mishti and says she is not well behaved and taking revenge from the family.

Abir decides to call Mishti and finds out what happened. Meenakshi took the phone from his hand and talks to Mishti. Mishti greets her, Meenakshi asks if they went to a club? She says yes but now everyone is back at home. She asks why you people didn’t come for the party? Mishti says the party is slated for tomorrow night. Meenakshi says the party was for tonight and you people didn’t turn up for the party and now even guests left as well so as my prestige. Mishti gets confused and says I remember you say tomorrow, Meenakshi denies and says I don’t know who failed here but I have faced a lot of embarrassment for this.

Varsha tries to cover up but Meenakshi declines it and says we will fox the date next time when we will meet. Later, Abir and Nanu came to Meenakshi and says if you want to do the party today, it will happen today. Abir called all the invitee’s back along with Maheswari family.

Here in Kuhu’s house all decked up for the party when Kuhu says, Mishti shouldn’t come with us. Rajshri says she is your sister, then how can you say such things about her? Abir appears there and says all are waiting back in the house. Please be quick and leave for the venue. Mishti gets ready. Maheswari family makes a grand entry in the Rajvansh house and all of them celebrated the party with dance. Salam-E-Ishq plays in the background. Mishti and Abir imagined themselves dancing with each other. Priest dictates a holy day for marriage after 10 days. Later, Abir interrogates Mishti about the truth, Mishti says she remembers Meenakshi aunty words but maybe it’s her fault. Meanwhile, Kunal comes there and shouts at Mishti.

Precap: Kuhu pressurize Mishti to ask for apology to Meenakshi, Mishti does the same. Vishwambhar holds her hand. 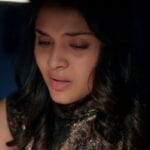 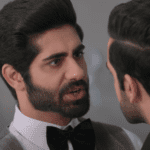 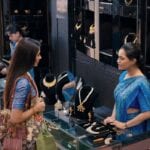