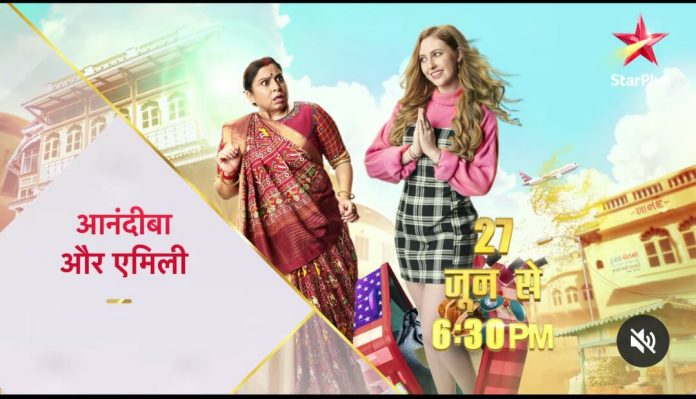 Episode starts with Aarav assuring Emily about helping her in serving food to Jaibala. The latter gets nervous after covering her face with veil, as she couldn’t able to see anything. Whereas, Jaibala waits for Emily to serve her food. Gunjan enjoys the drama and waits for Pinky to start their plan. Meanwhile, Emily hears Aarav’s voice through her earpods and follows his instructions. She mistakenly says english words, while Jaibala gets shocked. Anandibaa covers up for Emily and handles the situation smoothly.

Here, Gujan gets irked seeing Emily serving the food to Jaibala perfectly and waits for Pinky to begin their plan. She then gets up and goes towards her sister in order to signal her to start the ploy, whereas the latter gives thumbs up to Gunjan and takes a control over the huge fans.

Emily slowly serves the food to Jaibala, while the latter gets impressed and praises her. Whereas, Anandibaa becomes nervous and keeps looking towards Emily and Jaibala. Meanwhile, Aagaya comes towards Aarav and starts talking to someone about his work. He shares his problem with Aarav, while the latter takes his phone to instruct the caller.

Elsewhere, Emily thought that Aarav was talking to her and follows his instructions. She goes towards Jaibala again and puts more food to the sides of the plate. The latter gets stunned seeing Emily’s behaviour and confronts Anandibaa about it.

Aarav realises his mistake and immediately corrects it. Whereas, Anandibaa gets into a difficult situations and ask Gunjan to help. The latter makes up a lie and says that Emily wants to feed everyone completely, while Anandibaa agrees to her and makes Jaibala believe about it.

Ahead, Anandibaa keeps complimenting Gunjan in front if everyone. Whereas, Pinky starts the fan but the air couldn’t able to remove Emily’s veil from her face. The latter scolds her sister and taunts that she couldn’t able to do anything correctly. Pinky apologises to Gunjan and then goes to correct the wiring, but at that time she herself gets the shock.

Gunjan helps Pinky and makes her sit on the bed, while the kater shares her experience with her sister. The latter plans to expose Emily and goes towards her. She puts the fans in front of Emily’s face and then goes inside, while Jaibala compliments Emily for her service and blesses her before deciding to leave.

Further, Jaibala takes all her luggage and meets everyone before leaving, while Gunjan starts the fan and it uncovers Emily’s face. Everyone gets shocked seeing it and begs Jaibala for mercy, but the latter couldn’t able to see anything as something went into her eyes. Anandibaa gets relieved as Jaibala couldn’t able to see Emily’s face and bids adieu to her, while Gunjan hides Jaibala’s ticket and ploys a cunning game against Emily.

Precap:- Gunjan ask Emily to go inside her room as the ritual gets completed and then holds her veil to uncover her face in front of Jaibala. The latter gets shocked seeing Emily and taunts Anandibaa about it. She reminds her about the past situation, when she made Jaibala break her daughter’s marriage and ask Anandibaa to do the same. She proclaims that it’s Anandibaa’s test to choose in between her authorities or Aarav’s marriage, while Anandibaa gets shocked and becomes nervous to take a decision.

Episode starts with Aarav sitting along with Emily and ask her to keep her face covered. He gets scared of getting exposed in front of Jaibala and thinks that his dream of visiting America will also get ruined. He determines to save Emily and stays along with her, while Kanchan comes there to give food to them. She knocks the door while he ask her the secret password and then opens the door for her. She serves them food and ask to stay inside their room only, while Aarav assures her. She leaves and then again comes there making sure that they both stays inside their room.

Here, Aarav becomes nervous while Emily gets bored waiting inside the room. He sings songs for her to entertain and both enjoys each other’s company. She then opens her veil and laughs along with him. They both runs inside the room and tries to catch eachother.

Gunjan ploys against Emily and manipulates Jaibala to stay along with them till the Muh-Dikhai ritual. The latter acts to be emotional and says that Anandibaa will miss her if she leaves without attending the function, while Jaibala feels bad and decides to stay till the function gets over. She also tells Jaibala to taste Emily’s handmade food.