Khimji tells everyone about going back. However Premji’s parents request them to let Anandi stay there for a few more days. Khimji unwillingly agrees out of courtesy. Kalpesh overhears this and goes and inform the same to Anandi. Sejal and Ratan have a conversation about how will they tell Anandi about staying there. Ratan says Anandi cannot sleep without holding her hand. Anandi comes there and questions her about leaving.
However Sejal convinces Anandi on pretext on not going to school and enjoying together at Premji’s house so she agrees. Ratan hugs Anandi and feels emotional. Khimji and Ratan inform Baa about not letting Anandi know that she is already married to Jigar. Devadi overhears the conversation and thinks to use it against Anandi on right time. Khimji explains Baa about Dr Sarita and Kadvi Baa being against child marriage so they had hidden the truth.

Khimji, Ratan and Kalpesh bid goodbye to Anandi emotionally. Once they leave, Anandi feels distraught and runs behind them calling them. Premji and Sejal hold Anandi in embrace as she breakdown. While Jigar looks on and feels annoyed. Devadi thinks now she knows a big truth which she will reveal to Anandi later according to time and smirks. Anandi gets a nightmare, she hears someone singing lullaby in Ratan’s attire but when she turns, its a lady with red eyes which make her afraid. She gets afraid and wakes up.
Sejal tries to calm her down, even Premji comes there. Both Sejal and Premji sleep by Anandi’s side to make her sleep comfortably but still she misses her parents. Jigar wakes up to find there is no water in his room, when he goes to get it he finds Sejal and Premji sleeping by Anandi’s side and feels jealous. Khimji asks Ratan if Kalpesh could sleep, he says he might keep fighting with Anandi but misses her. Ratan asks Khimji if he could sleep, Khimji changes the topic and leaves for work.

Anandi argues back and says she didn’t see even though she is wearing spectacles. Baa shouts that why no one is around. Sejal hurriedly goes to see her. Baa tells Sejal to stop, as she wants her idol of Krishna to be shown to one who deserves it and taunts Sejal indirectly. She calls out for Devraj. Devraj comes and asks her how she came suddenly without informing. She gets angry but Premji handles the situation by saying that his father meant if she had informed before, either of them would have gone to receive her.

Devadi gets excited hearing Maadi Baa’s voice and comes there. Baa gets very happy to see Devadi and greets her gladly. She meets Kanku happily too but calls Jigar as Gopal and shows disinterest towards him. Baa asks where is Bhanu. She comes on wheelchair. Baa taunts Sejal if she doesn’t feed her mother in law. Sejal gets disappointed. Bhanu bends to touch Baa’s feet but she stops her. Baa gives her idol to Devadi to hold and then picks up her feet and places it on Bhanu’s thigh. She says she cannot bend so now she can easily her touch.

Maadi Baa says everyone looks disappointed by her arrival. She asks if they had all thought that she is dead by now. Devadi tells her that a lot has happened in her absence. Baa asks them what are they hiding from her. Premji unwilling tells her about gauna. She asks why she wasn’t informed about it. Anandi asks ice-creams vendor if she did wrong to get scolded and tells him to give her ice-creams again. She happily comes back home eating ice-cream.

Baa and Anandi get shocked seeing each other and both ask what they are doing there. They get into another argument. Premji tries to stop Anandi and tells her to touch Baa’s feet to take blessings. Anandi goes to touch her feet but Baa pushes her away saying her hand is impure as she was eating ice cream with it. Premji defends Anandi and tells she is still a kid and Sejal explains Anandi about Maadi Baa. Premji tells Baa that she can choose any room she likes. Baa says none of the rooms are suitable for her lord Krishna.

Devadi sees Anandi and Sejal laughing together and thinks of something. She tells Baa there is a room which she may like, and shows her Anandi’s room. Baa enters inside and pretends talking to Lord Krishna’s idol. She says he likes this room. Anandi gets shocked and asked if she cannot stay here.

Baa gives money to Jigar as blessing. Kanku comes there and Baa says because she wasn’t here she had to give money first to Jigar. Anandi sees Baa giving money to Kanku so she also happily touches Baa’s feet and asks for money. Baa insults and her and says rude words to her, she doesn’t give her anything. Later Baa tells Sejal that she doesn’t like manners of Anandi. Devadi says Anandi is very smart and tricks Baa to make Anandi do the cooking ritual. Maadi Baa says Anandi to cook Lapshi for her kitchen ritual. Devadi goes to kitchen and give all the ingredients to Anandi.
She says her to cook alone. Anandi panics and wonders how she will cook. Baa keeps Sejal engaged with work and doesn’t allow her to go. Anandi struggles to cook alone. Devali stops Kanku outside kitchen but she manages to go inside. Kanku quickly tries to write down the recipe to help Anandi but she cannot complete it due to Devali. Anandi reads it and sees Kanku had asked her to transfer some quantity from cooker to pan but she doesn’t know what to do next.

Anandi goes outside kitchen and lies to Devali that she is going to use washroom. She comes to Jigar and requests him to let her talk to Ratan for one minute. He scolds her but then gives his phone however Ratan is busy cooking and doesn’t receive the call. Anandi plays a video to see how Lapshi is cooked but before she could finish Jigar comes back and takes the phone. Anandi sees Devali waiting outside her room. She throws a decorative piece to distract her and quickly runs inside her room. Devali scolds her for being late.

Anandi sees that there is no ghee among the ingredients that Devali gave her. She sees it placed on top of the shelf and climbs up to get it but falls down on floor and gets hurt. Anandi again gets up and takes the ghee. She makes Lapshi according to what she had seen in the video. Devali goes to kitchen and spoil the Lapshi cooked by Anandi by adding lemon in it. Devali gets shocked to see Anandi has already served Lapshi to everyone and they liked it. Devraj gives Anandi money as blessing.

Baa asks Anandi to serve her more Lapshi. Devali thinks her plan will be revealed if she tastes the spoiled Lapshi so she intentionally drops the whole bowl of Lapshi and scolds Anandi instead. Anandi says Devali if she can give her share of Lapshi to Baa as she is elder, Maadi Baa gets impressed by her talks. However when Baa sees Devali looking displeased, she says Anandi to let Devali eat it. Devali thinks she need to eat and pretend to save herself from getting revealed.

Devali takes a bite but struggles to swallow it. She rushes to vomit it out and wonders how did Anandi cook well. Sejal and Anandi talk to Ratan on videocall. Jigar is coming with oil paint bottle in his hand and collides with Anandi due to which color splashes on his shirt and even on Anandi’s new dress. They both get into argument. Premji comes there and scolds Jigar for always fighting with Anandi. He complains about his shirt getting ruined so Premji asks him to change it. Anandi also tells that he ruined the gift given by Devali. Premji takes her along to clean it.

Devali provokes Jigar against Anandi. He falls into her words and reveals to her that Anandi had asked for his phone to call Ratan and finds she had checked Lapshi recipe online. Devali goes and informs about this to Maadi Baa. She decides to punish Anandi even without saying that she is giving punishment. Anandi comes to meet Baa and she gives her oil to massage her feet. She asks Anandi to stand and do the massage and doesn’t let her sleep.

To know what happens next stay tuned to this space. 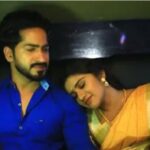 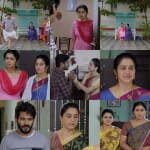