The episode starts with Bondita asking Sampoorna how her hands got dirty with sand. Sampoorna replies that they might have got dirty somewhere and asks Bondita why she is asking her such questions and if she doesn’t trust her. Bondita clears that she trusts her and asks her to come to the kitchen and make bhog by 9am so that Trilochan gets happy and gives her the keys. Sampoorna asks her not to worry since everything will be fine. Bondita walks away. Sampoorna thinks that she will never serve Trilochan and soon Bondita will side her too and she will get the keys.

Bondita brings coffee to Anirudh. She calls it “kafi” and Anirudh corrects her but Bondita says she knows but prefers saying “kafi” that gives more feel. Anirudh chuckles and then tells her that he is unable to understand the case since from one side both the parts seem right while from the other they seem wrong and there is no proof. He then blames Bondita for eating rasgulle hiddenly. Bondita complains about how he and Trilochan get to know everything about her.

Anirudh says that she is not a good thief and asks her to clean “chashni” from her mouth giving her handkerchief. Bondita cleans her mouth and tells Anirudh that Sampoorna gave her rasgulla and is glad that there is another person apart from Anirudh who will give her rasgulle now. Anirudh says that he is the only one with the right to give her badam wale rasgulle though. Bondita agrees and then asks Anirudh why he took one person’s case only if he thinks both sides are right.

On the other hand, Trilochan is on phone. He sees Binoy and asks him where his mother-in-law and father-in-law are. Binoy says that he doesn’t know and it seems like they are his in-laws as he keep worrying about them. Trilochan understands they are still in the mansion.

Bondita comes there and tells Trilochan that Sampoorna made bhog for Devi and praises it a lot saying that smell is going to the village as well. Trilochan says that, more than the taste of the food, it is the pure heart with which bhog is made that matters. Anirudh comes there. Bondita is sure that Devi Maa will like bhog a lot because Sampoorna has pure heart and then Trilochan will give keys to Sampoorna. Trilochan says that the day when that will happen won’t ever come.

Pandit calls everyone to the temple since it’s time to give bhog to Devi Maa. Everyone gathers in temple and Pandit asks Bondita to give bhog to Devi Maa since she is the Lakshmi of the house but Bondita says that Sampoorna is the elder Lakshmi so she should do that. Sampoorna walks to Mata Rani’s idol recalling how Trilochan insulted her previously. She thinks that soon Anirudh will bash Trilochan in front of everyone.

Before Sampoorna can give bhog, Trilochan stops her and says that he will check first. Sampoorna says that she made bhog exactly like it is given to Durga Maa. Trilochan checks the food she made but halwa is smelly. When he check the halwa, he suddenly drops it as there is a dead rat in it. Everyone gets shocked. Trilochan scolds Sampoorna who cries saying that she made bhog properly but someone must have ruined it and wonders who. Bondita tries comforting her.

Devoleena says that such a smell was coming from Trilochan’s room. Everyone gets shocked. Trilochan yells at Devoleena and says that no smell except agarbathi and diya smell can come from her room. He blames her for putting blame on him to save her daughter. Devoleena asks everyone to come along with her so that she can show.

Everyone goes to Trilochan’s room. Trilochan says that there is no smell and the only smell can come from Devoleena’s mind which is filled with rubbish. Devoleena puts the agarbatti out of the room and everyone starts smelling something stinky. Devoleena finds a rat trap in a corner and asks Trilochan how it got in his room.

Sampoorna glares at Binoy who recalls the moment she threatened him to reveal the secret to everyone. Binoy asks Trilochan whether he put the dead rat in his wife’s prasad since he didn’t want her first kitchen to be successful. Trilochan is shocked seeing that he is suspecting him. Sampoorna cries and wonders how many times she will have to prove herself pure and innocent. She says that she should leave the house if someone is in pain because of her staying there. She says that she will kill herself. Anirudh wants to stop her.

Bondita says that Trilochan cannot do this ever since everyone knows that he cannot accept any mistake in pooja so he won’t ever ruin bhog to bring Sampoorna down. She cannot believe he can do anything like this when he doesn’t even stand in the temple without washing himself. Devoleena asks her how she can take Trilochan’s side after seeing what happened. Bondita says that she still can’t believe. Sampoorna thinks that Bondita won’t ever let anyone go against Trilochan. 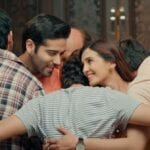 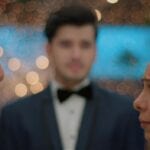