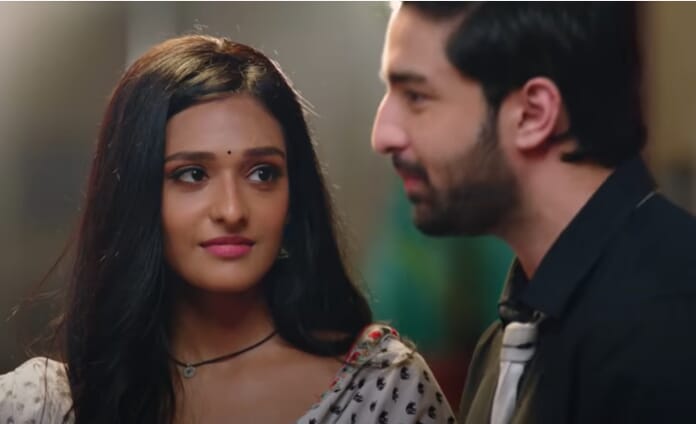 Scene begins in Lakshmi rushes back to her home. She finds her grandpa is struggling to take water. Lakshmi stops him and helps him to get it. She apologies to him for being late. She complaints to him doesn’t she asked him to give a voice then simran didi will come and help him in her absence. He caresses her hair and tells her he is already troubling her a lot. Because of him she is waiting her life like this here. He stares his family photo. He starts tearing seeing the photo. Lakshmi wipes his tears and tells him its not his mistake we losted our family in that accident. He shares to her it would have been better god take his life instead of them. Lakshmi asks him to stop talking like this reasoning only he is left for her in this world. She hugs him and cries. Grandpa says to her she is wasting her life here why don’t she go to her chachi house she will get an good life in abroad at least. Lakshmi gets angry on him and says don’t take their names to her. They didn’t even come to attend her family members funerals. They are not even ready to offer money to grandpa’s treatment. At least they can take him there right? Grandpa says to her he is good for nothing now that’s why. But they are calling Lakshmi to stay with them there right? Why don’t she go there after his death there is no one for her to take care of her? He gets emotional by saying it.

Lakshmi consoles him and says they are calling her just because they need the insurance amount. There is nothing in this world for free grandpa she says in tears. Grandpa asks her to use that money to continue her master degree. Lakshmi denies it reasoning she needs that money to cure grandpa. He complaints that he is always an burden to her. Lakshmi asks him to stop talking like this and take rest. He prays to god to give an secured future to Lakshmi. At least send someone whom loves her whole hearted.

Meanwhile Neelam returns to her home. She asks to Ayush where is his brother? Ayush (cousin of rishi) he gets the Prasad from her and informs to her he is in his drawing room. Neelam complaints that this Rishi is always spending his time there now a days she has no idea what was there? Ayush tells her he will go and bring him here. Ayush goes to Rishi’s room and finds him checking the drawing collections.

Ayush snatches it from him and questions him how many days he gonna waste his time behind this? Rishi gets angry on him and snatches the drawing back from him. He tells him its his life so don’t dare to touch it. Ayush touches his shoulder and says to him that mom is worrying about him a lot that he is locked himself in this room always. He can able to understand his feelings but it’s hard for his parents to understand it brother. He adds that he is a blessed child because he will get everything what he wished in his life. If he share to them that he is loving one girl whole heart they will say yes to it but where will he go and find that girl? Neither he don’t know her name not he see her yet? But he is loving her to the core. Rishi says to him that he will find his girl soon.