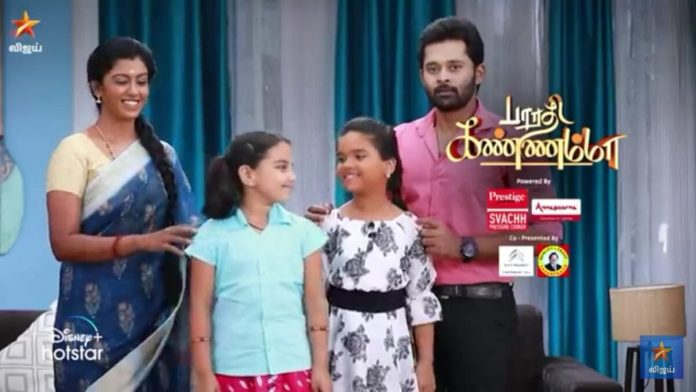 The episode starts with Bharathi shares to guest that he is father of Hema according to her. She starts enquire him about her mom. Even he doesn’t know who is her mom then how will he answer to her questions? Bharathi says to them that he can’t able bear her questions that’s why he showed his lover photo to Hema as her mom.

He shares to them that he loved Hema a lot in college days but that destiny separated her from him. He kept her name to his daughter in her memories. He showed her photo to Hema because she is not alive now. If he shows someone else photo to her then it will become a problem in future.

Bharathi says to them it’s not wrong according to him. He can show anyone as her mom who is Kannamma to question him? Is she has any rights? Kannamma tells him that she has all rights to question him because truth is on her side. Bharathi is not giving heed to her feelings at all. He demands her to confess the truth then he will understand her side.

Kannamma says to him that she is not gonna hide anything from him. Why should she keep patient? Soundarya asks her to calm down but she didn’t give heed to her. Kannamma is furious and tells her why should she calm down? Will she calm down like this if she in her place? Soundarya gives permission to her to reveal the truth.

Soundarya accepts that it’s her mistake she is in her state. She is not a stone heart person to stop her hereafter. As a mom she have all rights to do it. Even Venu supports Kannamma there. Akhil asks them doesn’t he used to said them let’s reveal the truth to all but no one allowed him. Bharathi asks them what’s this new drama? He is ready to watch it now. Soundarya scolds him for mocking at him.

Bharathi is not ready to believe her words at all. Sivagami’s family gets shock to hear it all. Venba fears to get caught. Kannamma reveals to him that she gave birth to twins Soundarya separated Hema from her after her delivery. Bharathi mocks at her for creating stories.

Kannamma says to him that she is well aware he won’t believe her. Bharathi says to her he was the one done deliver to her. He narrates to everyone what happened on that day. He challenges her to deny his words. Kannamma tells him she is not deny the fact he done delivery to her. Kannamma reveals to him that Venba tried to kill her by injecting poision to her Is he know it?

Venba pretends like innocent in front of Bharathi. Kannamma says to her she can’t able to bear her drama. It’s high time she might reveal all the truth to everyone today. She doesn’t care whether he believe her or not? Kannamma says that Durga whom saved her from Venba. After that he done delivery to her. He left after Lakshmi born.

She got pain after he left Soundarya whom done delivary to her. Second child born on that day. If he don’t believe her then he can ask Soundarya what’s true? Bharathi is not ready to believe them at all. She asks him will he believe third person? Kannamma reveals to him Tulasi whom called Bharathi to help her? Is he reminds her? She brought Tulasi here will he believe her confession?

Kannamma asks Tulasi to reveal all the truth to Bharathi. Tulasi narrates all truth to her. Kannamma asks him Is he learn the truth now at least? He can ask his mom Is it true or not? No mother will lie in this matter just keep it in his mind. Bharathi gets emotional and asks Soundarya Is she saying the truth? He pleads with him to say it out it’s all lie. He shares his grief to her and pleads her to deny it.

Soundarya apologize to him for her mistake. She tells him Kannamma is saying the truth. Bharathi gets devasted hearing the truth. Soundarya shares the reason behind her deed. She tells him that she expected to see Bharthi giving love to Hema. She fears that he will hate Hema it he come to know she is Kannamma’s daughter that’s why she hide the truth from him. Kannamma came to her and lashes out at her for separated Hema from Kannamma.