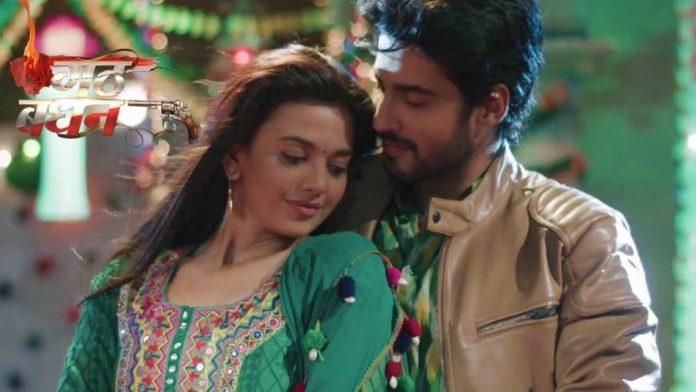 In Colorstv show Gathbandhan, Mai to distract Dhanak as she prepares for her exams.

Dhanak and Raghu returns from the jungle and gets shocked seeing Mai’s condition. Raghu gets angry and says he will kill that person who has done this to her. Dhanak and Mia stop him from killing Sawan. Mai says she is enough to handle her enemies. But what to do with other enemy who is present here and has painted her face with black ink. Raghu asks the name of the person and Mai points at Mahindra. Raghu gets angry and takes out his sword to runs towards Mahindra. Dhanak stops him and later Mahindra tells the whole story as how in pressure he has done this with Mai. Mai asks Raghu to take revenge from his daughter and spply same black ink on Dhanak’s face. Raghu steps ahead to apply ink on Dhanak face but ends up cutting his wrist. Mai gets tensed and hugs him.

The biggest day of her life, but a true test for him! How will Raghu fulfill his promises this time? Watch #GathBandhan on 9th May at 9 PM. @shrutiisharmaa @abrarqazi47 Anytime on @voot .

Now in the upcoming episode will see Dhanak will start falling for Raghu and soon she will realize her love for him. Dhanak and Raghu spend time on terrace. Dhanak asks Raghu where is saw her first. Raghu tells her at Sejal’s wedding. Raghu tells her that he was attacted towards her good heart and he caresses her face. Otherside, Inspector will come and will give code of conduct certificate to Dhanak. Dhanak gets happy. Inspector announces that Dhanak will become an IPS officer in two days. Mai promises to herself that she will not let this happen.

What Mai do next will be interesting to watch. In the new promo of Gathbandhan it is seen Dhanak is not allowed to give IPS exam as she was caught with cheating papers. So, what do you think who has hidden the paper in Dhanak’s dress, Mai or someone else? For all the answers keep watching Gathbandhan.