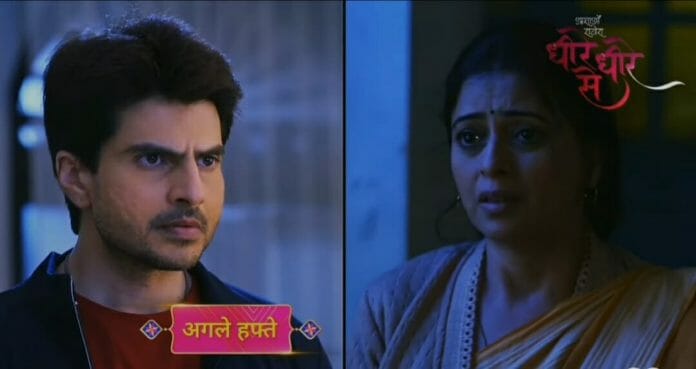 Star Bharat’s newly launched show Dheere Dheere Se is gearing up with an interesting drama with Raghav faces Brij Mohan’s wrath but after that Brij Mohan’s concern makes him decide not to smoke while Bhawana who is upset with Raghav learns the truth and regrets her actions towards Raghav.

Now it will be interesting to see what will happen next? Will Raghav and Bhawana cross path again? Will Bhawana gets a chance to apologise to Raghav? Will Raghav decides to stay firm in his decision to stay away from Bhawana?

In the current track it shown that Bhanu questions Devraj how he knows about him losing his tempo. Bhawana gets worried while Devraj follows Raghav’s instructions and tells Bhanu it’s a small town so he knows it also lies they have to wait for few more days for the insurance money. Bhanu informs the same.

Bhawana gets relieved that Raghav saved her from facing Bhanu’s anger. Other side Swati deliberately makes Bhawana’s purse fall infront of Brij Mohan and says it’s fallen from Raghav’s dress so Brij Mohan questions Raghav. Raghav lies but Brij Mohan ends up scolding him then leaves.

Swati thinks that Raghav is more clever than she thought. Devraj calls out the Shastri’s and Bhawana decides to take her purse from him just then Bhanu arrives there. Bhanu and Devraj gets into an argument and taunts each other.

Devraj then gives the purse to Bhanu then leaves. Bhanu taunts and insults Bhawana for her inability to keep a purse safe with her but wants the insurance money for herself which upsets Bhawana and she gets mad at Raghav for returning her purse like this.

Savita and Brij Mohan talks about Raghav’s current state of mind. Raghav learns that Bhawana is upset with him but gets hurt that Bhawana don’t even giving him an opportunity to explain his side.

Bhawana overhears the conversation of Raghav and Brij Mohan and regrets for staying mad at Raghav also decides not to repeat the mistake meanwhile Raghav decides to stay away from Bhawana who fails to give him an opportunity to explain everything.

In the upcoming episode it will be shown that Bhawana will feel dizzy and fall on the road unconsciously. Aanchal who is with her will get worried and ask for the ongoers help.

Raghav will come there and take Bhawana and Aanchal in his car to the hospital. He will assure Aanchal nothing will happen to Bhawana.