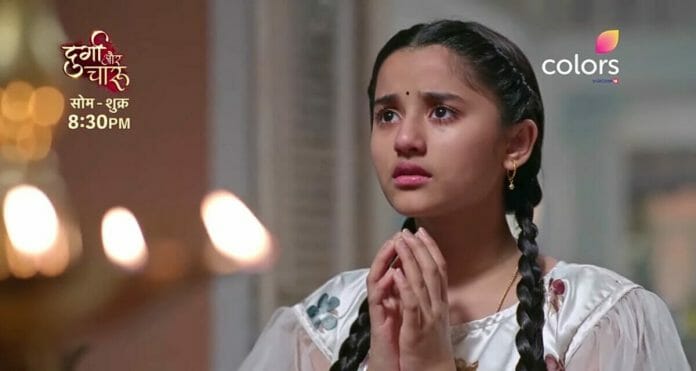 Now, Durga and Charu meets after 5 years and they gets close without knowing that they are sisters. Charu gets accused in murder and Chumki creates problems for Durga so it will be interesting to watch that what going to happen in the future episode.

Earlier it’s seen that, Baanke told Bholi that Charu will get her family and the latter will end up in jail. Bholi attacked Baanke and noticed that he escaped. Other side, Durga apologized to Chumki on Binoy’s behest. Charu came there and asked Durga for help. Meanwhile, Sheru returned to orphanage with his man.

Bholi killed Sheru’s man. She asked Sheru to make his man as Baanke and tell to police that he witnessed Baanke’s murder. She reached the palace and claimed that Charu killed Baanke. Sampurna and Durga defended Charu. Police came there to arrest Charu.

Charu told Durga to get educated and become courageous girl. Police took Charu from there. Bholi murmured to Chumki that Baanke is alive still. Chumki cried saying that she can’t live without Bholi so Bholi has to live in the palace. Sampurna gave permission to Bholi to stay in the palace for Chumki’s sake.

In the upcoming episode, Chumki will hurt herself and lie to Choudharys that Durga attacked her. Binoy will slap Durga.

Will Durga be able to prove her innocence? Where is Baanke? What will happen with Charu?