Today’s episode starts with Rohit asking Sonakshi to open the door. He fakes that Pari is not well. Suman and Pari support Rohit and Sonakshi comes out from the room. Sonakshi gets angry at Rohit for doing acting. Rohit drags Sonakshi but Sonakshi runs to the balcony and gets adamant not to get checked by Rohit.

There, Tanya runs to Rohit and asks him to help him when she learned that Rohan and Veena is taking her to the psychiatrist. Here, Sumit takes Sonakshi to the hospital. He gets angry at doctor for making Sonakshi wait. Sonakshi asks Sumit to relax.

Other side, Rohit tells to Veena and Rohan that Tanya is suffering from PTSD and asks Rohan to stay away from Tanya. Later, Nishi learns that Naren showed movement seeing Sonakshi. Nishi stands shocked. Further, Sonakshi’s test is done. Sumit asks doctor to arrange a room for Sonakshi as she is a celebrity. Sonakshi asks Sumit not to call her celebrity as at this time she is equally a patient like others.

Here, Nishi decides to keep Sonakshi away from Rohit and Naren. Rohit on call says to Sumit to take care of Sonakshi. Nishi over hears Rohit’s talk and smirk thinking Sonakshi too might be infected with the Super virus.

At home, Suman prays from Sonakshi’s well being. Pari asks Suman to go and stay with Sonakshi. At hospital, Sonakshi gets teary after learning a patient out there is died. Sumit gets surprised seeing Sonakshi fearing. Sonakshi worries what will happen if her reports will be positive. She asks Sumit to take care of her family after her. Episode ends with Sumit getting emotional hearing Sonakshi. And Sonakshi thanking him for being there with her at this tough time. Rohit sees Sonakshi and prays to God to save her.

Precap: Tulsi tells to Rohit that Sonakshi is detected with the virus. Sonakshi goes missing. 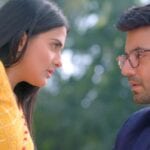