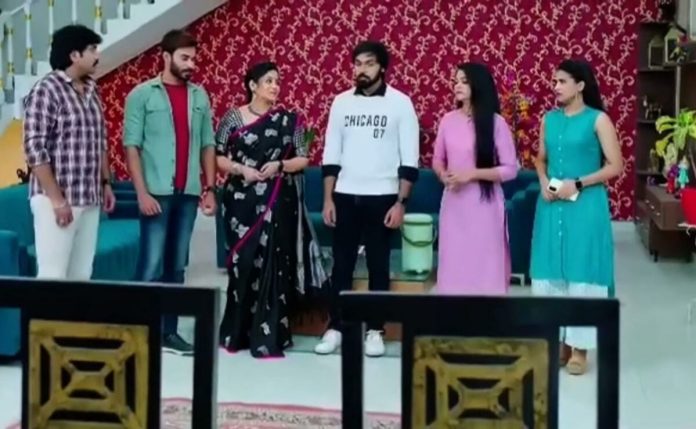 As reported earlier Nirupam apologises to Jwala for his behavior. Jwala says it’s fine as you have right on me. Hima comes there. Jwala thanks her. At home, Swapna insists Nirupam to marry Shoba. Nirupam denies and he leaves home to stay with Satyam. Prem comes to Hima’s cabin to know her answer. He tells her she is changed. Hima says all are saying the same, seems like I put on some weight. Prem thinks she doesn’t even see my video so it’s clear that she doesn’t like me. He is about to leave at that time nurse gives her the phone which got repaired.

Hima tells Prem that her phone got damaged. Prem feels happy knowing why she didn’t see the video. He asks if they can have tea. Hima agrees. Jwala brings the carriage to Satyam’s house. She sees Nirupam and asks what’s he doing. Nirupam says he left his home to come near some people. Jwala thinks he loves her that’s why he left home for her. Prem says he is happy to see him at their place. Satyam says it will be more good if they stay as family. Shoba comes there and tells them they can live as a family with Swapna. Swapna reunites with Satyam with a motive.

In the upcoming episode, viewers going to witness Shoba will tell Hima and Jwala that she did what they can’t do and from here onwards your lunch boxes are cut. Jwala will want to fight with her but Hima stops her. Swapna will come there and asks them what to do and what not to do as I like Shoba.

How Hima will unite Nirupam and Jwala? What’s Swapna’s motive?
All these questions will be answered in the upcoming episodes.