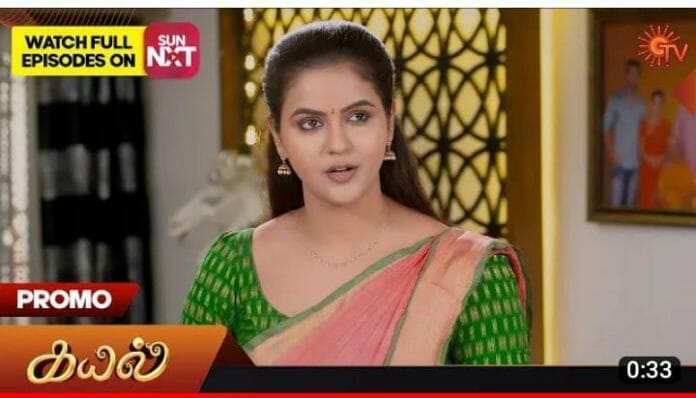 Sun TV’s popular show “Kayal” currently deals with Kayal trying to solve Devi’s issues. Earlier its seen that Kayal failed to collect the money to buy Jewels. Now it will be seen that Kayal to insult Dharmalingam

In the previous episode we saw; Kayal attend a interview in the new hospital. Doctor informed Kayal that she will appoint her as chief nurse but she want to give a reason why did she left from previous hospital.

Later, Anbu scared to get caught. Kayal confronted Anbu why did he standing here. He hide the money from her. He managed the situation there and left. Kayal returned to home. She received a letter. She got surprised to see Anbu’s police selection letter.

Arthi returned to home and greeted everyone. She shared her happiness with everyone. Kayal wished to surprise Anbu with the letter. She showed the letter to him. He was surprised to see it. Later, Kayal took Anbu to Dharmalingam house.

In the upcoming episode viewers will see; Kayal will pretend like talking nice with Dharmalingam. She will reveal to him that Anbu got police selection letter. Dharmalingam will get shock to hear it.

Vadivu will curse him fail in the physical test. Kayal will smirk at them and challenge Subrahmanyam to compete with Anbu. He will loss in front of Anbu. Dharmalingam and Vadivu will be shocked to see it. Later, Devi will prepare lunch for her family. Vedhavalli will plan to create a problem there.