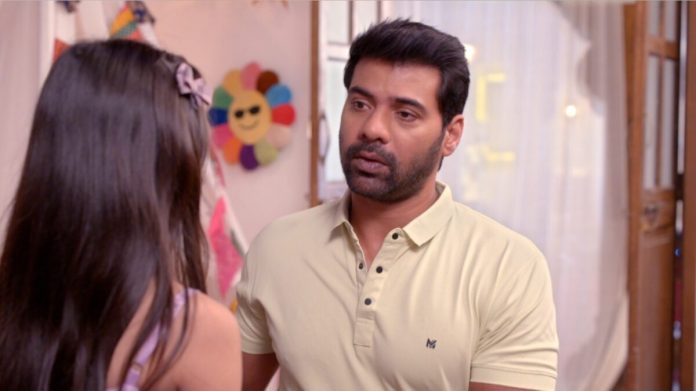 Episode begins with Damini tells Kaveri that Tulsi’s spirit entered the house. Kaveri tells her that Tulsi’s spirit won’t leave them and gets scared. Tulsi’s spirit says that she won’t leave Kaveri for beating Gungun up. Radha tells Mohan that she can’t stay here. Gungun pleads her to not leave. She says that Tulsi left now what the latter will also leave her. Radha hugs her. Mohan asks Radha and Gungun to go to their room and get some rest. Radha tells him that she want to return to her village. He tells her that he will beat her up if she talked about returning then. She nods at him. Vishwanath asks her to take care of herself. Gungun takes Radha to her room.

Damini calls Guru maa but no response from other side. She tells Kaveri that she has to complete her fasting then no one can stop her and Mohan’s marriage. They goes inside the house. Damini tells Mohan that they have to perform puja. Mohan recalls that how Damini slapped Radha and humiliated her. He ignores her and goes to his room. Damini asks Kaveri to stay with other family members then Tulsi’s spirit won’t be able to do anything. She adds that she will handle Tulsi’s spirit after completing her fasting. Tulsi’s spirit says that she won’t let Damini complete her fasting.

Kadambari tells Mohan that Damini behaved that way with Radha because Damini loves this family so much. She reminds him that Damini kept fasting for him. She asks him to forgive Damini and break her fasting. She adds that she is proud of him that he stopped her from doing a sin today. Meanwhile, Radha recalls that how everyone accused her and humiliated her. She cries hugging Gungun.

Gungun asks Radha to stop crying. She scolds her for going to throw the garbage into the dustbin. Mohan comes there with food and asks Radha to have it. But Radha refuses to eat. Gungun tells Mohan that if the latter made Radha eat then she won’t trouble anyone for a day and leaves the room. Mohan tells Radha that he knows that she is feeling bad but she should have food. He adds that she is looking weak too. She tells him that she is fine. He feeds her forcefully. Tulsi’s spirit says that Mohan broke Radha’s fasting unknowingly and smiles.