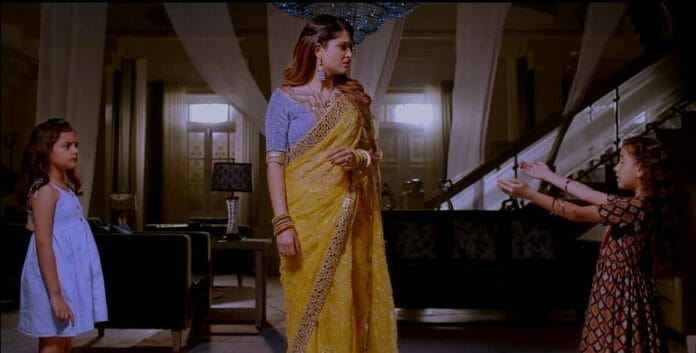 Star Plus popular daily soap “Sanjog” have garnered a huge amount of audience. The gripping storyline filled with twist and turns makes it engaging to the viewers. Previously, Rajeshwari and Amrita had an heated argument.

The latter gets upset seeing Rajeshwari’s behavior towards Tara, while Gauri blames Chanda for the imprisonment if Gopal. Whereas, Tara misbehaved with Amrita as well as beated her classmates. Amrita took a huge responsibility and decided to self tutor Tara.

In the current track, Rajeshwari and Rajeev gives a warning to Amrita while the latter accepted their challenges. She also convinces Tara to trust her and proclaims that she won’t let her go anywhere. Meanwhile, Rajeshwari also accepted Tara after hearing her horoscope, that the baby will bless her grandmother’s health.

Here, Gauri along with her family meets Gopal from aside while he insists the constables to let him meet his daughter. One of Alok’s constable sees Chanda and spots the birthmark. He sends the picture to Alok while he identified her as Amrita’s real daughter.

Alok goes to check Chanda while Amrita also comes there and gets shocked seeing the proofs of her daughter. She confronts Alok while he told her about the truth and she goes along with him to see her real daughter.

Ahead, Gopal gets elated after meeting his daughter and the katter gives all the constables sweets prepared by Gauri. The constables takes Gopal in the bus but suddenly feels dizzy and falls unconscious. Whereas, Gauri and her family reaches their and helps Gopal to escape.

Later, Alok and Amrita gets shocked seeing the condition if the bus. They helps the constables to get consciousness and questions about Chanda, to which one of them notify them about the truth. Amrita gets devastated after losing her child again.

Now in the upcoming episode, Amrita will search for Chanda and ask a kid about her house. She will get tensed and rushes to find her daughter, while Chanda questions Gauri about her box.

The latter will ask her to hurry up as the police were about to come there. She will warn Chanda that they will get inside the jail if police catches them. Gopal along with his family will pack their stuffs to leave the house, while Amrita will keep searching for them.

Will Amrita find about Chanda?

Will Amrita be able to win the challenge?