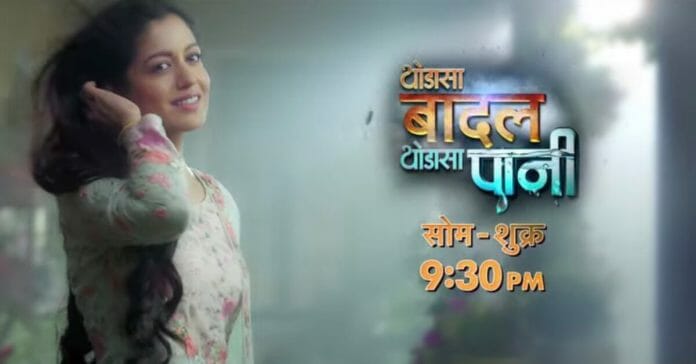 Colors TV show Thoda Sa Badal Thoda Sa Paani is about the story of a simple girl’s struggle in her life to find happiness for herself and her family. Priyanka continues her blackmail of Anurag to marry her. Kajol accepts Priyanka’s challenge to attend her wedding and prove to her that she is willing to detach from Anurag. Apu and Bolti get married with Anurag and Kajol’s help. What will Naina and Anandita do to take revenge from Kajol? Will Anurag and Priyanka get married? Will Kajol find out the truth behind Anurag’s marriage?

Kajol told Bolti to stay with Anurag as he might need her. Arjun told Bolti to think again whose hand to hold. Bolti told people who are right don’t need to think again. Anurag thought he has to give this pain to Kajol to save her or else he might have never let it happen. Anurag told Kajol to listen to her and offers to drop her home. Kajol told Anurag not to change hie way because of her as he is about to start a new life. Kajol reacher home and left Thakur Maa shocked by pouring a bucket of cold water on herself. Kajol told because she has no right on this haldi or Dr. Anurag. Naina told Priyanka you so get married soon or else Kajol would take away your husband.

Kajol doesn’t pick up Anurag’s call and thinks she cannot pick up his call as they have to face the reality as their roads are different from now on. Anurag thought now he won’t call Kajol and get so much busy in work that he won’t think about Kajol. Kajol gave oil to Chandana for her pain and told even though Chandana did not tell she can see her pain. Sharmila told Anurag he can’t give up on his life like this.

Kajol told this necklace is Anurag’s mother’s blessings and she wants to keep it with her as it might help her heal. Thakur Maa told it won’t help her heal instead it would keep her wound fresh so she should return it. Anurag finished his surgery successfully and his junior congratulated him. Priyanka kept calling Anurag again and again. Anurag watched his phone ring while driving and met an accident. Anurag called Kajol and told her he wanted to tell her that he loves only her before it was too late.

Anurag told Kajol he met an accident and doesn’t have much time left. Kajol overheard the location and reaches the site of accident. Anurag told Kajol there is no regret even if he dies. Priyanka heard on news that Anurag has met an accident and started crying. Priyanka came to the hospital and gets angry watching Kajol and told she is the reason Anurag was not picking up her calls and met this accident.

Kajol told Priyanka that instead of worrying about Anurag she is worried if he was with Kajol and why he was not receiving her calls. Doctor tells Anurag was injured badly and needs surgery. Kajol told Sharmila not to worry Anurag will be fine. Doctor Sarkar tells that the surgery is over but Anurag’s response is not as expected and it seems Anurag doesn’t want to live.

Doctor told that the next few hours are critical for Anurag and they should pray to God. Kajol thought she won’t let anything happen to Anurag. Kajol prayed to Maa Durga to save Anurag. Panditji gave Kajol a flower to keep near Anurag. Anurag’s operation continues but the doctors are unable to stabilise him. Priyanka stopped Kajol from entering the operation theatre and pushed her. Doctors try saving Anurag but fails. Kajol disguised as a doctor and entered the operation theatre. Kajol told Anurag he has to wake up for their love,Kajol told Anurag told him that they have God’s blessing and requested Anurag to come back for their love.

Kajol placed the flowers given to her by Panditji and Anurag started breathing again. Doctor told everyone that Anurag was saved by someone’s love and it was a miracle. Priyanka freaked out on looking at reports and shouted at the doctor for not telling her. Doctor Sarkar told they saved Anurag but couldn’t save his legs and he may never be able to walk again. Anurag starts shouting and tried to get up from his bed but falls down. Doctor Sarkar told Anurag that his nerves were severely damaged. Kajol hugged Anurag and told him to trust her and everything will be fine. Priyanka Is criticised for her decision of leaving Anurag. Kajol stayed by Anurag’s side and supported him.