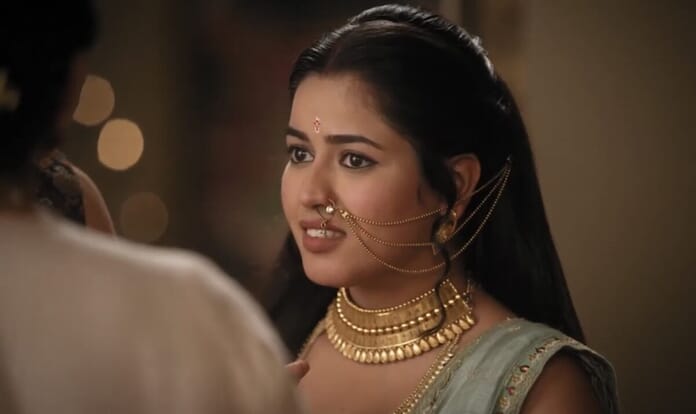 Star Plus popular daily soap Vidrohi is all set to serve the audiences with a high voltage drama, along with the ongoing plot. Gadadhar tries to burn Kalyani to take his revenge, but gets unsuccessful. Meanwhile, Radhamani gets instigated by her mother. Will Gadadhar gets punished for his deeds or will Banthara be able to save him?

In the earlier episode, Subarna determines to punish Gadadhar for betraying their country and helping the Britishers. Radhamani tries to stop her reminding that he did everything for her. But, Subarna stays firm on her decision stating that she always does fair judgement.

Here, Tilottama ignores Gadadhar a d cries remembering his betrayal, while he somehow able to manipulate her. He blames everything on Amba and lies that he only loves her. He insists Tilottama to help him, while she agrees.

Tilottama requests Kalyani to forgive Gadadhar, but latter denies stating that she can’t interfere in Subarna’s decision. Gadadhar hears their conversation and decides to sneak out of the palace, but then stayed back to take his revenge from Kalyani.

Ahead, he gets inside Kalyani’s room and ties her. He pours kerosene everywhere and takes the fire lamb to burn her. At that time everyone comes there and gets shocked seeing his move. They tries to stop him, but he denies to forgive Kalyani.

Kalyani sees him busy with the others and tries to free herself. She gets successful and faces Gadadhar. She pours chilli powder on his eyes and takes away the fire lamp from him.

Later, Kalyani scolds Gadadhar for his deed, while he apologises to them asking for mercy. He says that he only wanted to scare Kalyani, while Subarna makes her guard chains him. Banthara gets worried about herself, while Subarna gives Kalyani a chance to punish Gadadhar.

Now in the upcoming episode, Banthara will manipulate Radhamani asking her to help Gadadhar, as he have done everything for her. Meanwhile, Subarna will aid Kalyani’s wounds, whereas latter says that she can’t even imagine what pain must Subarna be going through by punishing Gadadhar. Subarna will look at Kalyani in pain, while Radhamani gets into thinking.

Will Banthara also gets exposed?
How Kalyani will punish Gadadhar?
Will Radhamani gets manipulated?