Episode begins with Preesha apologize to Rudraksh for hurting him. He says she need not to apologize to him because everything was acting according to their plan and says no one can separate them. She says she felt weird while lying like that in front of everyone. Yuvraj says she needs to tolerate all this because as a doctor she knows that medicine is necessary to cure the disease. Rudraksh says it was necessary to do otherwise she knows that what would have happened. She says she is relieved because their plan worked because she was so tensed today.

Rudraksh says he was also tensed thinking no one should caught his acting. She says God shower path to her and recalls how she met that mysterious person with Mahima’s picture and he said that he is so hungry so he will tell her everything about Anjali if she gives food to him then. She buys food for him and tells him to eat slowly. He says he didn’t ate anything since 3 days and thanks her for giving food to him. She asks he seems like educated person then why he is like this.

He says it happened because of Anjali and says he was vice president in company and Anjali was his secretary then he falls for her and even their engagement happened but suddenly he lost his job because of the lose company faced and says he thought Anjali will support him in his difficult situation but one day before marriage she escaped with his money and from that day he is searching her.

She asks is he sure that she is Anjali. He says he was about to marry her and how can he misunderstood her and says in these 5years he met many people who betrayed by her by using new names. She asks why he didn’t complaint about her. He says he loved her truly and wants to live with her happily. She thinks how is this possible and if he is saying truth then he has to find the truth.

Seeing Police he runs from there. She wonders how to find the truth of Mahima and gets worried saying Mahima got Saaransh’s custody but she has to stop her and decides to talk about it to Rudraksh. Rudraksh says she did right by calling him there. He recalls how Preesha told him about Anjali and that mysterious person. She says Mahima cheated many person and they can’t send Saaransh to that kind of person. They starts to search that mysterious person and Preesha shocks seeing him dead and gets to know that he died because of accident. Preesha shows him to Rudraksh. Rudraksh gets worried thinking how they are going to find proof against Mahima now.

Preesha says they has to go to chennai and enquiry about her in mental asylum. They reaches chennai and gets to know that mental asylum is not exist now due to fire accident and some lady is responsible for that. Preesha says it could be Mahima who did this. Rudraksh says Mahima doing everything for money. She says she has plan but they needs Yuvraj help to execute her plan. Yuvraj says he was shocked seeing them in his house. Preesha tells him to do fake marriage with her and also about Mahima. 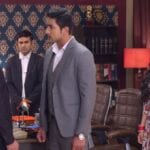