Episode begins with Rakhi asks Sherlyn that why she is not saying anything and tells her withdraw the case she gave against Sarla. Sherlyn nods at her. Karan says they has to go to Police station right now to withdraw the complaint and he will accompany her.

She says she doesn’t want to give complaint against anyone but will withdraw the complaint she gave earlier and leaves from there with Karan. Ramona takes Mahira from there. Rakhi apologize to Sarla on behalf of Ramona saying she had to face a lot because of her friend. Sarla says it was not her mistake so she need not to apologize.

Rakhi tells Preeta to go to Arora house to spend time with Sarla and she will inform Karan about it. Preeta nods at her happily. In Arora house, Janki asks what happened to Ramona. Sarla says only she doesn’t know about their plan. Preeta tells her to not get angry because if they told her about the plan then she would not have let them excute the plan.

Janki asks them to tell what happened there instead of explaining each other. Preeta says she wanted to tell everything to Sarla but Sristy stopped her. Sristy tells Janki about everything which happened in Luthra house. Sarla says Ramona apologized to her and Karan informed them that Sherlyn withdraw the case too and gives all the credit to her daughters.

Sherlyn gives water to Ramona. Ramona yells at Sherlyn,Mahira. Mahira says it was Ramona’s mistake then why she is scolding Sherlyn. Ramona says she is angry on Mahira not Sherlyn. She asks why she didn’t throw those laddus. Sherlyn tells her to calm down.

Ramona says Sarla is not behind the bar and she had to apologize to her and it all happened because of Mahira and leaves from there angrily. Sherlyn says they lost against Preeta again so they has to stay silent until they plans something else to separate Karan and Preeta.

In Luthra house, Preeta enters her room and sees Karan sleeping on her sofa and goes to washroom thinking he wants to sleep there today. Karan wakes up and lays on bed. Preeta also lays on bed without noticing him. When she realized that he is beside her , she tried to get up but he holds her hand and tells her to sleep.

She says she is tired and doesn’t wants to fight today so he should sleep on the sofa. They argues with each other. He throws the pillow out of the room. When she went out to take the pillow he closes the door from inside and tells her to sleep outside only. She says she can’t sleep anywhere else and tries to convince him but fails miserably. 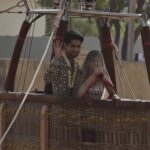 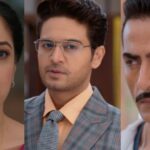 May 26, 2022
Kabhi Kabhie Ittefaq Sey 26th May 2022 Written Update on TellyExpress.comUpdate in progressClick to readhttps://www.tellyexpress.com/kabhi-kabhie-ittefaq-sey-25th-may-2022-written-update/